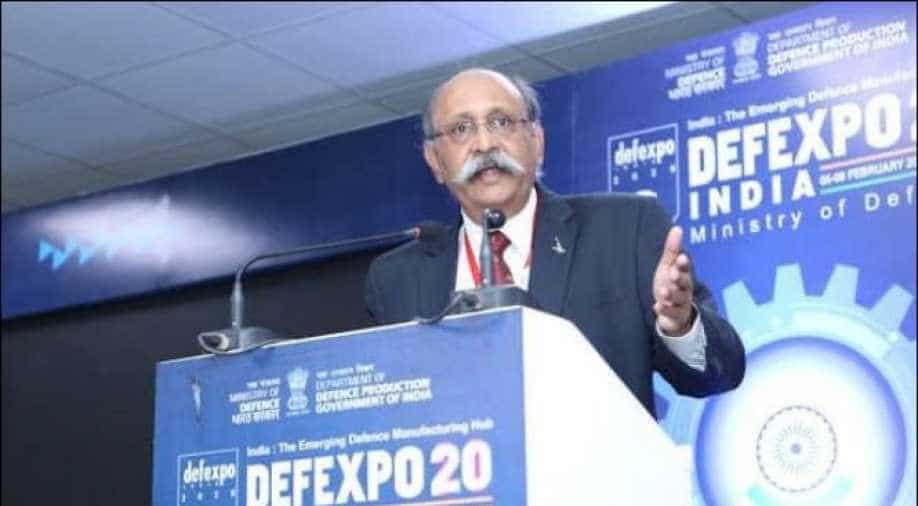 Lt Gen P R Shankar is a retired Director General of Artillery. He gave great impetus to the modernization of artillery through indigenization. Photograph:( WION )

WION spoke to Lt Gen PR Shankar (retd), Professor of Practice at IIT Madras, whose team had exhibited the theoretical possibilities of the project at the recently concluded Defense Expo in Uttar Pradesh.

The department of aerospace engineering at IIT Madras is working on developing a next-generation artillery shell that can be used by the Indian Army to hit targets that are nearly twice as far the existing distances, with greater precision. While this is an existing technology, it has to be noted that no country has implemented in artillery shells.

WION spoke to Lt Gen PR Shankar (retd), Professor of Practice at IIT Madras, whose team had exhibited the theoretical possibilities of the project at the recently concluded Defense Expo in Uttar Pradesh. Lt Gen P R Shankar is a retired Director General of Artillery. He gave great impetus to the modernization of artillery through indigenization. He has deep knowledge, understanding and experience in successful defence planning and acquisition, spanning over a decade. Major 155mm Gun projects like the Dhanush, M777 ULH and K9 Vajra, rocket and missile projects related to Pinaka, Brahmos and Grad BM21, surveillance projects like Swati WLR and few ammunition projects came to fructification due to his relentless efforts. He has been a Professor of Practice at IIT Madras’ aerospace engineering department and is actively involved in applied research.

Here are the excerpts of an exclusive interview with him.

WION: What necessitates the development of such a new generation artillery shell, over and above the existing ammunition?

Prof Shankar: We are working on an artillery shell that is based on the ramjet technology, this will enable it to travel unto a range of 60kms and above. Most shells that are in use travel around 30kms or so. Extending the range of a shell would be highly useful in non-contact warfare scenario, like the situations on the western border. Some of the current shells can travel up to 24kms. We could extend the range unto 30kms by traditional methods, but doubling it to 60kms is going to be a game-changer. Changing the gun would mean a tedious process, instead, we could change the ammunition and improve the performance.

WION: How compatible is this artillery shell going to be with current artillery guns used by the Indian Army?

Prof Shankar: Although we are developing a new kind of shell, we would not be building it from scratch. We are planning to re-design the existing shells using ramjet propulsion technology. The new shells are compatible with all the existing artillery guns such as Bofors, Dhanush, Vajra and ATAGS. It is a fact that each gun has its own characteristics, but the shell we are developing is of a 155mm calibre. Hence, it would be usable on all Indian or foreign platforms that utilize the 155mm shell.

WION: How is your method different from the standard range-extension methods for artillery shells?

Prof Shankar: Traditionally, we would utilize a method called ‘base bleed’ where a chemical at the base of the shell burns emits gas to fill the vacuum behind the shell to reduce the base drag force. Base bleed enables an increase of range by 10 to 20 per cent. We are aiming to double the range by using ramjet propulsion technology through indigenously developed fuel and air intake at the front that helps the shell travel faster, thus enabling it to reach double the range.

WION: What are the challenges pertaining to maintaining accuracy when you aim to extend a shell’s range?

Prof Shankar: When a shell travels for around 30kms, the normal methods of correction are applicable. However, when a shell travels 60kms, it would be affected by wind and weather conditions far more. So, we would incorporate some kind of system to keep it on the intended track. It is called a Precision Guided Kit. We will be developing the precision-guided kits, especially for such extended ranges.

WION: Would Indian ordnance factories and facilities be able to mass manufacture such shells for the Army’s requirements?

Prof Shankar: Most of the shells that we need are made here. When we do resort to importing, it is only restricted to smart ammunitions and precision-guided munitions (PGMs). Our ramjet based shell is like any other shell and we would be ensuring that OFB (Ordnance factory board) can manufacture it. The ability to manufacture it is there, but we are working on design and technology. That's where IIT Madras comes in, along with IIT Kanpur, Armament Research and Development Establishment(ARDE) Pune and Research Centre Imarat (RCI) Hyderabad.

WION: Would there be a significant reduction in unit cost due to the indigenous manufacture?

Prof Shankar: Primarily this technology is a first for artillery shells. Being a new product and new technology, they tend to be very costly. But it is certainly less expensive when compared to missiles and other weapons that have a range of over 60kms. There is also scope for exporting this type of shell to friendly foreign countries.

WION: How long before we have a working prototype? Any major engineering challenges that we are faced with?

Prof Shankar: We expect to develop a working prototype within three to five years. Development of this shell would require a synergy between different types of engineering. We’ll have to combine expertise in Fundamental engineering of propulsion (solid propellants), structural design, a lot of design capability in geo-referencing and guidance with a lot of engineering capability and principles of rocket technology. In the case of a missile, we can design from scratch, but here we are taking an existing ramjet technology and fusing it with an existing shell to get something that doesn't exist. But if we manage to fit a ramjet into an artillery shell, it would pole vault us into the next generation.

WION: Funding and facilities are major components that drive defence research. How are we placed?

Prof Shankar: Lot of things have been proven. The design is ready and we are waiting for validation and prototyping. All the theory is ready and certain lab tests are done. We are waiting for funding as well because with new testing facilities we need to do more lab tests and start the prototype test. Test facilities that are to be set up can only be done with government support. Some of the facilities that we would need would be India’s first such facilities. There are a few, but they are with the missile development programme, and those are of a different kind. Once we go commercial, we need many such facilities to do fundamental testing for the long-term. For the ramjet to start working, it has to be taken to speeds of Mach 1 (speed of sound) so that we can test it. So we’d require a high-end wind tunnel that would be able to generate such speeds.

WION: Are there any other defence firms that are working on the same technology?

Prof Shankar: At the recently concluded DefExpo, we saw the Norwegian firm 'Nammo' display a shell of ramjet projectile. Their projectile and our projectile are technology-wise very different. While the theory is the same, the application is different. Ours is a simple system. We also know that various others are working on it as this is very futuristic defence technology.