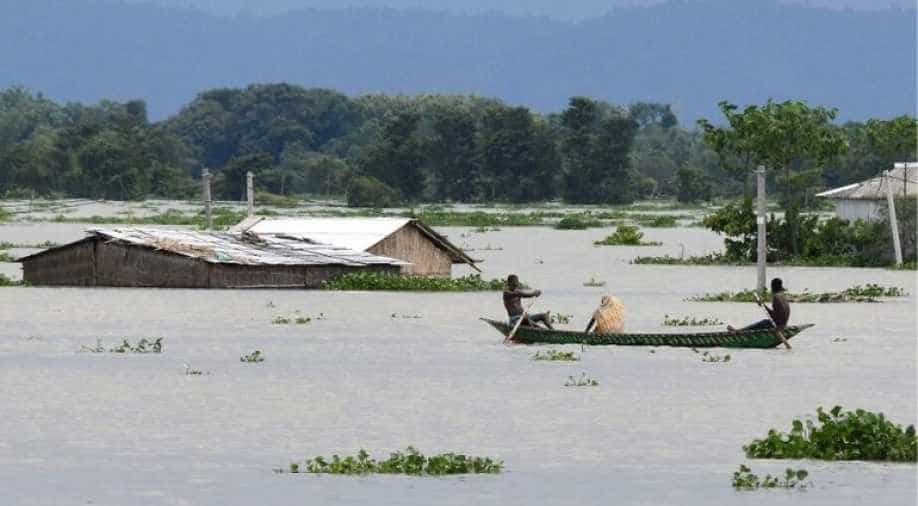 Villagers travel on a boat at the flood affected area of Gagalmari village in Morigaon district of Assam state on July 14, 2020. Photograph:( AFP )

At a time when flood situation remains grim in North Eastern states of India, Indian Air Force has alerted its units and kept them on standby on Tuesday.

Sources in the Indian Air Force reveal that Eastern Air Command is monitoring the flood situation in the North Eastern states carefully and has kept its assets like helicopters including the Mi 17 and Advanced Light Helicopter (ALH) on standby.

A senior official from Indian Air Force said, “We are monitoring the situation and the assets for Humanitarian Assistance and Disaster Relief (HADR) are kept on standby at key locations and will be deployed based on requisition by State.”

On the other hand, as many as 111 people have died in floods and landslides in India’s eastern state of Assam. While more than 24 lac people in the state have been affected due to floods, 24 of the total 33 districts of Assam are worse hit with river Brahmaputra and it’s tributaries flowing dangerously above the normal level.

Today, Home Minister Amit Shah spoke to Meghalaya Chief Minister Conrad Sangma regarding the loss of lives due to floods in the state.

“Loss of lives due to the floods in West Garo Hills, Meghalaya is very disturbing. I have spoken to the Chief Minister, Sangma Conrad and assured him all possible help from the Central government. Nation stands resolutely with the people of Meghalaya in these trying times,” Shah tweeted.