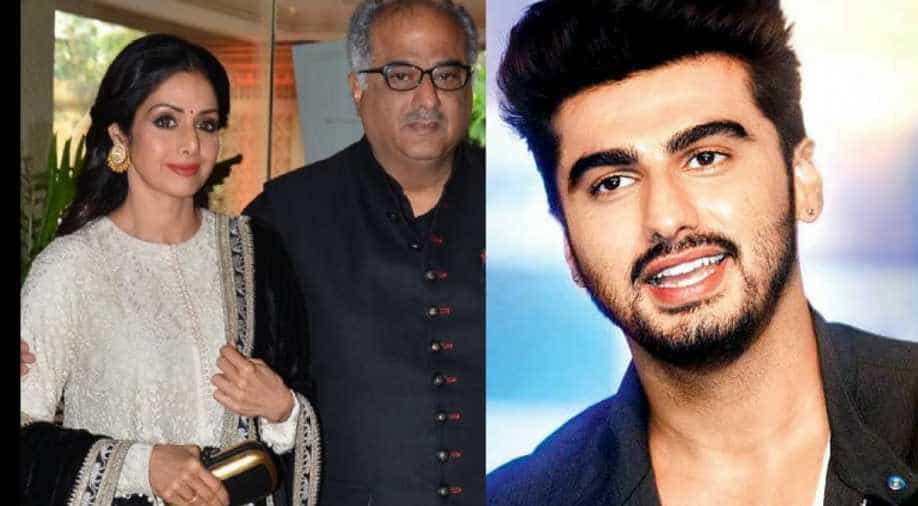 India's veteran actress and Bollywood's first female superstar, Sridevi died of 'accidental drowning' in Dubai hotel's bathtub on February 24 leaving a void in the entertainment industry. She was laid to rest on February 28 at Vile Parle Crematorium amid thousands of fans who thronged the crematorium to catch a glimpse of the star.

While it took almost three days for her mortal remains to come back to India after thorough investigation and clearance certificate from the authorities, one person who stood by Boney Kapoor apart from other family members, was his son from first wife Mona Kapoor, Arjun Kapoor. From giving support to Sridevi's two daughters who happen to be his step-sisters -- Jahnvi and Khushi, to flying to Dubai to get her mortal remains back or being in cortege with his father and Sridevi's husband as a pillar of strength, Arjun displayed character and grace in his behaviour.

Sridevi, who married filmmaker Boney Kapoor after he divorced the first wife Mona Kapoor, the late actress earned a lot of flak from the society for being a 'home breaker'. While she dealt with a lot of negative press and societal pressure at the time, the star came out of it all. Meanwhile, Boney Kapoor's kids from the first wife -- Anshula and Arjun Kapoor also grew up to become something in life.

In an old interview of 2014 that has surfaced again, Arjun can be seen talking about his struggles as a child borne out of broken marriage and broken home, growing up with strong values as his mother inculcated, taking care of Anshula, and most importantly his equation father and stepmother Sridevi.

As the host asks Arjun if he was angry as a child because of his father's decision, Arjun said: "I am sure I must have gone through anger, angst, vulnerability but I understood eventually. You have to make your peace with it. You can’t make that one decision that your father makes, dictate how you turn out as a human being. It can be a part of your journey but it can’t be the only thing -- because my father did this, all my decisions will be based on it. That’s not how life functions. And he’s been there for me in his capacity. Thankfully, my mother brought me up well enough to make my own choices and decisions in life... My mother never poisoned me against what he has done.”

When asked if he had anything against Sridevi, he explained, "That’s something I am sure I have had various degrees of emotions towards her and him. It’s too long in the past to even dwell on things ... I try to look forward. I make it a point not to dwell on what could have or should have happened...”

He goes on to share: "It’s very cordial. I respect anybody in my father’s life the same way because he would expect me to do that. So I respect her and don’t wish ill towards anyone.”

On being asked if Sridevi had been encouraging about his journey in Bollywood, Arjun said, "I am sure she is but not with me per se. As in, I’ve never sat down face to face with her and had a chat about how she liked my work or is she following. There is a decent understanding of two people to maintain a certain equation because we love a certain man who is in between both of us. It's as simple as that!"