AIMIM chief Asaduddin Owaisi: 'Take money from Congress but vote for me' 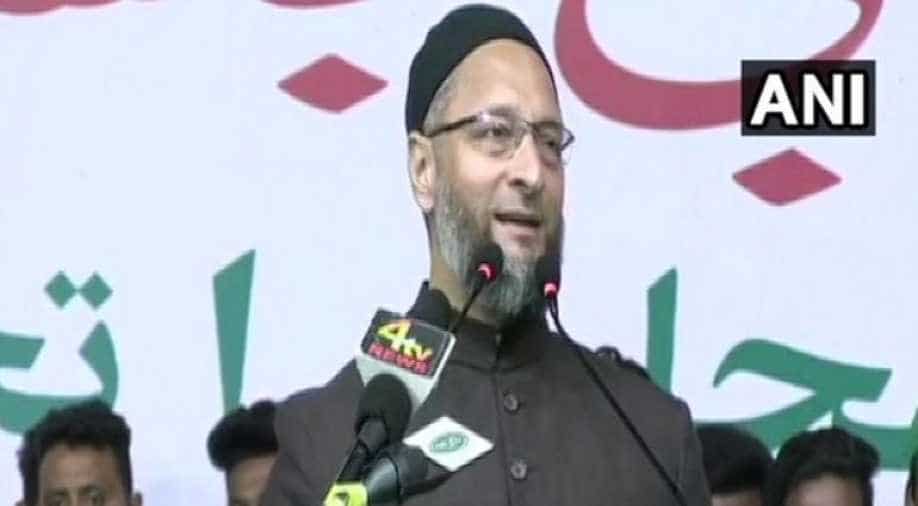 Addressing a public gathering in Sangareddy district, the AIMIM leader also took a jibe at Congress and said they speak of secularism but BJP and Congress are the two faces of the same coin.

AIMIM chief Asaduddin Owaisi on Monday asked people to take money from Congress leaders and vote for his party in the upcoming municipal elections in the state.

Asaduddin Owaisi, on violence in Telangana's Bhainsa: Yesterday's incident is condemnable. I demand the CM to take action against all culprits. I also demand him to provide compensation to everyone who suffered losses. I appeal to the people of Bhainsa to maintain peace. (13.01) https://t.co/Ys4vVnx2fg

Addressing a public gathering in Sangareddy district, the AIMIM leader also took a jibe at Congress and said they speak of secularism but BJP and Congress are the two faces of the same coin.

Citing that there is no difference between Congress and BJP, Owaisi said "Congress party has RSS in its heart in BJP is in their mind. They speak of secularism. These three things brain, heart and tongue should be at one point. When the heart speaks then the brain admits it and tongue will speak," he said.

"On January 22, please use your votes wisely. People in Congress have a lot of money, take it from them. You'll be getting it due to me. Just vote for me. If they are giving you (money) then take it. Whatever they give, take it and loot it. I say to Congress to raise the rate, my price is not Rs 2000 only. I am worth more than that," Owaisi said.

LIVE: AIMIM President and Hyderabad MP @asadowaisi addresses a public meeting in Sadashivpet, ahead of the Telangana Municipal Elections. https://t.co/p2n8XIIqhn

Police have imposed prohibitory orders under Section 144 of the Criminal Procedure Code in Bhainsa till January 15, which witnessed clashes between two groups.

According to Telangana Police, clashes took place between two groups who started pelting stones at each other in the late hours on January 12, which turned violent resulting in 13 houses and 26 vehicles being set on fire. Three police officials, including District SP and DSP who were part of the police team that reached the spot sustained injuries in the violence.

Explainer: What is 2-DG, India's new anti-Covid drug? How does it work?