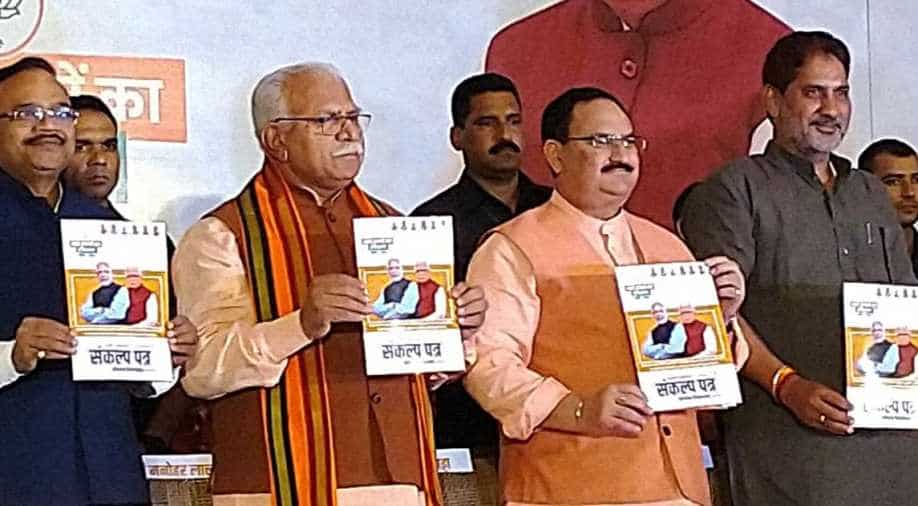 The BJP on Sunday released its manifesto and made a host of promises to woo the electorates ahead of forthcoming Haryana Assembly elections.

In the manifesto titled 'Mhare sapno ka Haryana' (my dreams of Haryana), the party made a plethora of promises ranging from launching Haryana start-up mission, constitution of a new 'Yuva Vikas and Rozgar' ministry and one All India Institute of Medical Sciences (AIIMS), doubling of farmers` income by 2022 and increase in pension.

It was released in the presence of Chief Minister Manohar Lal Khattar, BJP national working president J P Nadda and other party leaders.

For the farmer in the predominately agricultural state, the BJP promised to ensure that every farm receives water and their owners be granted tested seeds of high yielding variety.

The party said that every crop will be bought at Minimum Support Price (MSP) and the benefit of the government schemes will be directly transferred to the bank account of the farmers.

It reiterated the promise made by Prime Minister Narendra Modi to double the farmers' income by 2022 in the manifesto.

According to the manifesto, every vegetable market will have a testing lab and micro-lab will be built in every five villages for the same purpose.

Polyclinics will be established in every district for the check-up of the animals.

To give a push to the start-up ecosystem, it promised to initiate a state start-up mission, for which four entrepreneurship centres will be constituted.

A whopping Rs 500 crore will be spent on the skill development of over 25 lakh youth.

District Employment Centre will be upgraded to Model Career Centre.

Loan without the guarantee would be made available for the education purpose by the government.

Among other things for the benefit of the youth, the BJP promised to constitute 'Yuva Vikas and Rozgar' Ministry. To give a push to the sports, stadium and gymnasium will be constructed in all the villages.

Taking into consideration the health of the state, the party has promised to constitute one All India Institute of Medical Sciences (AIIMS) in the state, medical colleges in every district.

The BJP said that the seats in the medical college will also be increased.

It also promised to increase the number of Jan Aushadhi Centres to provide quality medicines at affordable prices to the masses.

Another reform in the health sector proposed by the party is to make Haryana malnutrition-free and Tuberculosis (TB)-free and create 2,000 wellness centres.

Keeping in mind the safety of women, the BJP said that "Pink bus service" will be started for them.

"Antyodaya Ministry" for the upliftment of the weakest section of the society will be formed.

Pension for the senior citizens will also be increased by one thousand from Rs 2 thousand to Rs 3 thousand.In lines with PM Modi's Pradhan Mantri Awas Yojana, the BJP in Haryana aims to provide housing to all by 2022.

The counting of votes will take place on October 24.