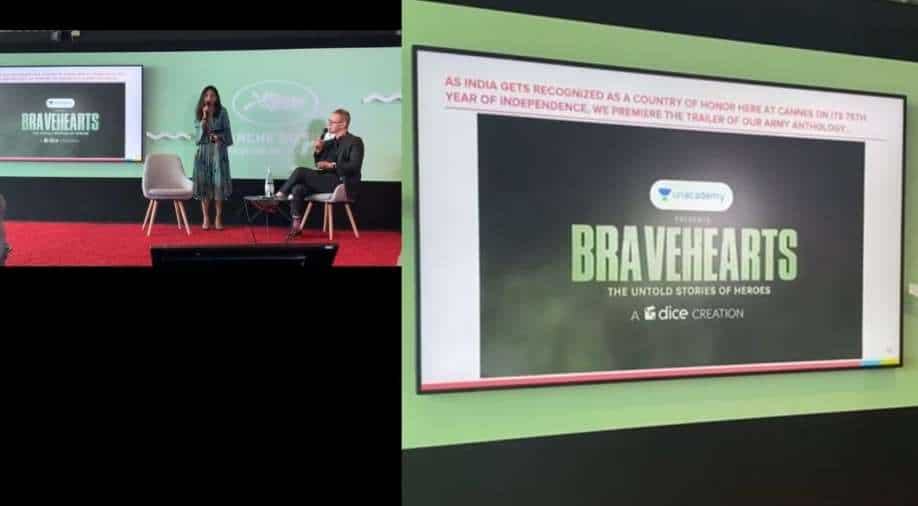 The trailer was unveiled post a talk by Pocket Aces’ Co-founder and CEO, Aditi Shrivastava, who shared the ideation and creation process behind the anthology.

Dice Media, the long-form premium content studio by Pocket Aces, is gearing up for the launch of its next big show - India’s first army anthology series called ‘Bravehearts - The Untold Stories Of Heroes.’ Riding high with their presence at the Cannes Film Festival this year as part of the India delegation, Pocket Aces unveiled the trailer of Bravehearts in front of a global audience on May 22, 2022, in the presence of Union Minister Mr. L. Murugan, Indian Ambassador to France, Mr. Jawed Ashraf, Strategic Advisor and Head of Cannes Next, Mr. Sten Saluveer, Additional Secretary I&B Ms. Neerja Sekhar, and NFDC Head of International Promotions & Special Projects Ms Sonal Mathur, among others.

Created in partnership with Edtech giant Unacademy to mark the 75th year of India’s independence, ‘Bravehearts’ is a show about the families behind the heroes in our armed forces. Each of the 5 stories in the anthology captures a unique aspect of the courageous journeys of army men and women and their families - whether it is getting into the armed forces after several failed attempts, or dealing with the loss of a loved one who gave up their life for the nation or getting to know a parent after 15 years of them coming back from service.

The trailer was unveiled post a talk by Pocket Aces’ Co-founder and CEO, Aditi Shrivastava, who shared the ideation and creation process behind the anthology.  Pocket Aces is one of the 5 new age media companies selected by the Ministry of Information and Broadcasting to be a part of the India delegation at the 2022 Marché du Film – Festival de Cannes.

Ecstatic to be launching the trailer at Cannes, Aditi, who is also the showrunner of ‘Bravehearts’ said, “We couldn’t have asked for a better platform to premiere the first look of Bravehearts. India is the country of honour at the Cannes Film Festival this year as our 75th year of independence also coincides with the 75th year of Cannes. Launching Dice Media’s first army show on this occasion and in front of a global audience is a dream come true. A large part of our creative team including the writers of the show come from army backgrounds and hence the show has been created in an extremely authentic manner inspired by true stories. Our debut at Cannes has been nothing short of spectacular, and we look forward to coming back next year with more wonderful content.”

The ‘Bravehearts’ premiere was lauded by the audience at the event that included international filmmakers and producers who are interested in collaborating with Indian creators as India grows into one of the biggest content hubs in the world.

The trailer will be launched to a wider audience on Dice Media’s YouTube channel on May 28, 2022.