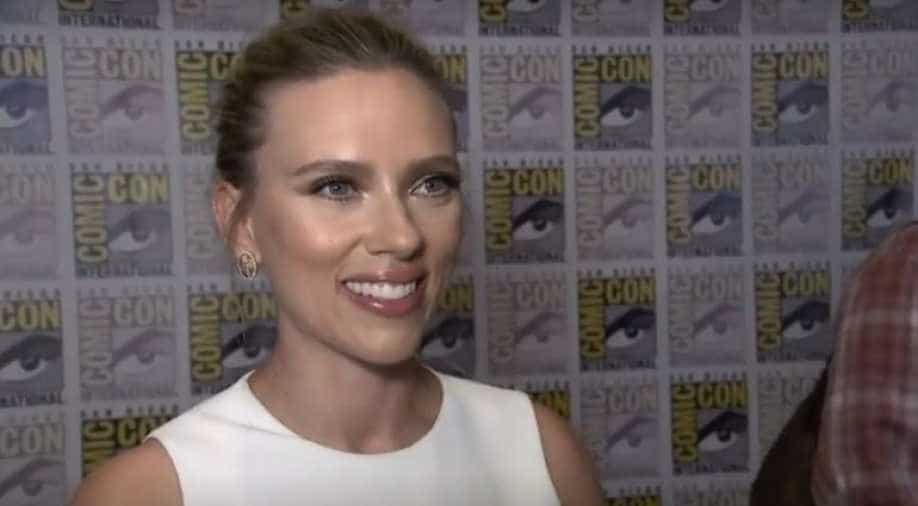 Scarlett Johansson while speaking to the media during Comic Con. Photograph:( Reuters )

Speaking on `Black Widow`, which is currently in the works, Johansson said, "I`m very excited about it, and I have to say, I was nervous coming here because we`re in the middle of shooting right now."

There was a time in the Marvel Cinematic Universe (MCU) when the only female superhero was Black Widow, played by actor Scarlett Johansson.

Cut to `Avengers: Endgame` era, where a number of women heroes helped in defeating the ultimate villain, Thanos. Following the huge successes of recent women superhero-centric films like `Wonder Woman` (2017) and `Captain Marvel`, the MCU announced a couple of female superhero flilms during Marvel Studios` panel at the San Diego Comic-Con 2019.

Speaking on `Black Widow`, which is currently in the works, Johansson said, "I`m very excited about it, and I have to say, I was nervous coming here because we`re in the middle of shooting right now, so it`s not a time that you could ever share anything with anybody on any side of the movie, particularly in this universe, where everything is just so huge and the pressure`s on. But I`m really, really proud of what we showed today."

The new film is set before the first `Avengers` film and offers insights into Johansson`s character Natasha Romanoff`s past in Budapest. `Black Widow` is part of Marvel`s new slate of films, where the girl power is strong.

Angelina Jolie made a surprise appearance at Marvel Studio`s Comic-Con panel to confirm that she has joined the MCU, and will star in the studio`s upcoming film `The Eternals`, co-starring Salma Hayek.

Additionally, it was revealed that Natalie Portman, who played Thor`s love interest Jane Foster in the first two `Thor` films, will star as a female Thor in the upcoming fourth film, `Thor: Love and Thunder`.

The movie will also see the return of Tessa Thompson as Valkyrie, confirmed to be the MCU`s first LGBTQ superhero.While Elizabeth Olsen as Scarlett Witch will appear in `Doctor Strange in the Multiverse of Madness`.

On being asked about the diversity when it came to female characters of the MCU, Johansson gushed, "It was amazing. I mean, there are a lot of women up there that I hugely admire--Angelina, Salma, Rachel, Tessa, Natalie."

`Black Widow` is all set to hit the theatres on May 1, 2020. Apart from `Black Widow`, Marvel also announced other films and series which include `Loki`, `Falcon and the Winter Soldier`, `Shang-Chi and The Legend of the Ten Rings`, `WandaVision`, `Doctor Strange in the Multiverse of Madness`, `Thor: Love and Thunder`, `Hawkeye`, `What If...?`, and `Blade`.