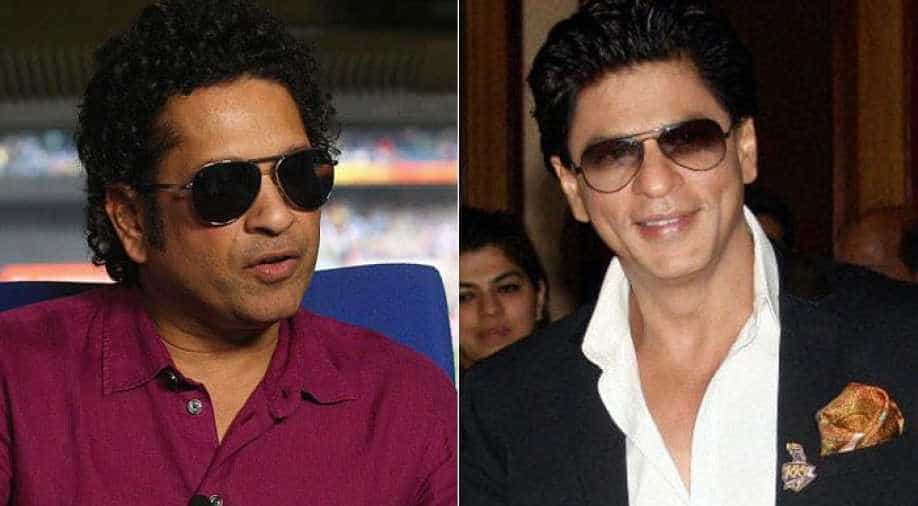 Bollywood powerhouse Shah Rukh Khan, who is known for his witty replies and eccentric sense of humour, had the most priceless response to legendary cricketer Sachin Tendulkar, who gave the actor an important driving lesson.

Bollywood powerhouse Shah Rukh Khan, who is known for his witty replies and eccentric sense of humour, had the most priceless response to legendary cricketer Sachin Tendulkar, who gave the actor an important driving lesson.

On June 25, SRK completed 27 years in Bollywood. The actor took to his Twitter account to share a video of him on a bike, which he rides for a bit and then says a few words for his fans.

Four days later, none other than the God of cricket replied to the actor`s tweet in a filmy way. The Master Blaster congratulated SRK on achieving the feat but also gave him an important driving lesson. "Dear Baazigar, don`t 'Chuck' De helmet. Wear one when on a bike Jab Tak Hai Jaan. Congratulations on completing 27 years! See you soon, my friend," Sachin tweeted.

SRK proved that he is not just `the king of romance` but also the `badshah of wit` who can leave his fans amused like no other star in Bollywood.
SRK responded quickly, "My friend, helmet pehenkar, on drive.. off drive and straight drive karna aap se zyaada behtar kaun sikha sakta hai! Will tell my grandchildren, I got my `driving` lessons from the great Sachin himself. See you soon over some fish curry. Thank you."

My friend Helmet pehenkar, On Drive..Off drive & Straight drive, karna aap se zyaada behtar kaun sikha sakta hai! Will tell my grand children, I got my ‘driving’ lessons from the great Sachin himself. See u soon over some fish curry. Thank u. https://t.co/QGG5YaGnu3

Well, the actor too will agree that wearing a helmet while riding a bike is of utmost importance as it keeps you safe. In the video posted on celebrating 27 years in Bollywood, SRK had recreated his entry scene on a bike, from his film `Deewana`.

While he thanked his fans for "bearing" with him for so many years, he also urged people to ride safely.

"I have been trying to entertain my fans and many times I have succeeded and many times I have failed. Thank you all for bearing with me. It`s a coincidence that my friends from a motorcycle company have sent me two motorcycles to try out the stunts I did in `Deewana` 27 years ago. I am going to give it a shot, but this time there`s a difference. I will make sure I am wearing a helmet. Always wear a helmet while riding a bike," the actor had said.

Over the years SRK and Sachin have often spoken about each other fondly.

A number of times, the actor has hosted sports award shows with the cricketer being among the primary awardees.

The two superstars also featured in a Pepsi advertisement around the 2003 World Cup.

On the work front, SRK has lent his voice to the king of the Jungle, Lion Mufasa, in the Hindi version of `The Lion King`.

Aryan Khan has lent his voice for Mufasa`s son Simba. This is the first time that the father-son duo has come together for a project.