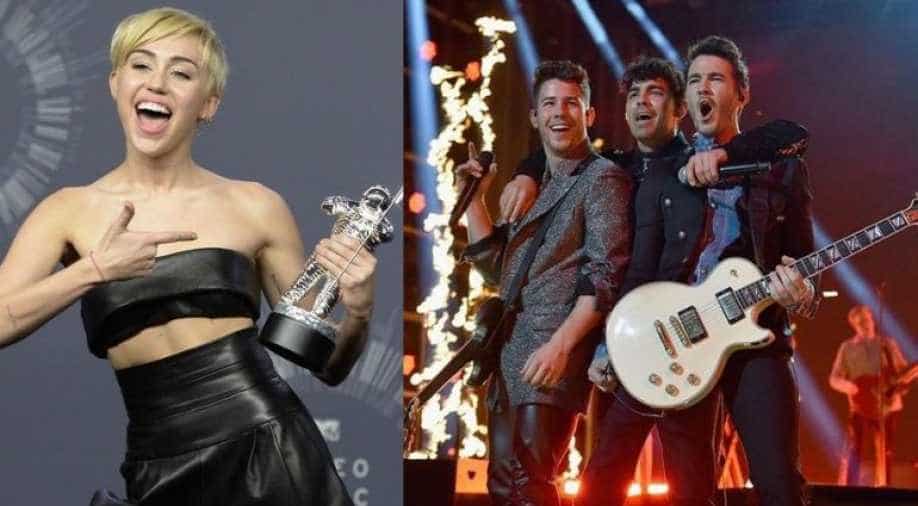 The Jonas Brothers were left surprised and speechless by their friend Miley Cyrus`s question during a radio interview.

The uninhabited Miley Cyrus asked a very personal question to the Jonas Brothers during their recent appearance on pre-recorded radio show 'Capital Breakfast with Roman Kemp'.

The Jonas Brothers were left surprised and speechless by their friend Miley Cyrus`s question during a radio interview.

The 26-year-old asked the brothers about their purity ring which they wore to symbolise their intention to stay virgins until marriage."Did it feel good finally taking off your purity rings?" Cyrus asked.To which, Joe Jonas laughed and replied, "Yeah!"

He exchanged vows with `Game of Thrones` famed actress Sophie Turner in Las Vegas earlier in May. While Nick tied the knot with actress Priyanka Chopra in a big fat wedding which took place in India in December 2018.And Kevin Jonas got married to Danielle Jonas back in 2009 in a castle on Long Island. Together they have two daughters Alena and Valentina.

Joe explained the importance of a ring during a recent appearance on James Corden`s 'Carpool Karaoke', "The purity rings (symbolized the decision]) to wait for the right person when the time was right, "he said."We grew up in a church, and our dad was the pastor, so it just kind of became natural for everyone we grew up with to do this, and to get one," he added.

The singer also confessed that the promise to stay a virgin during teenage was difficult. "When you`re about 15, 16 and you start dating, you go `Wait a minute, what did I say I was going to do? What did I promise to do?`"

The Jonas Brothers are coming up with another album titled `Happiness Begins` in June and are also kick-starting a tour on August 4.