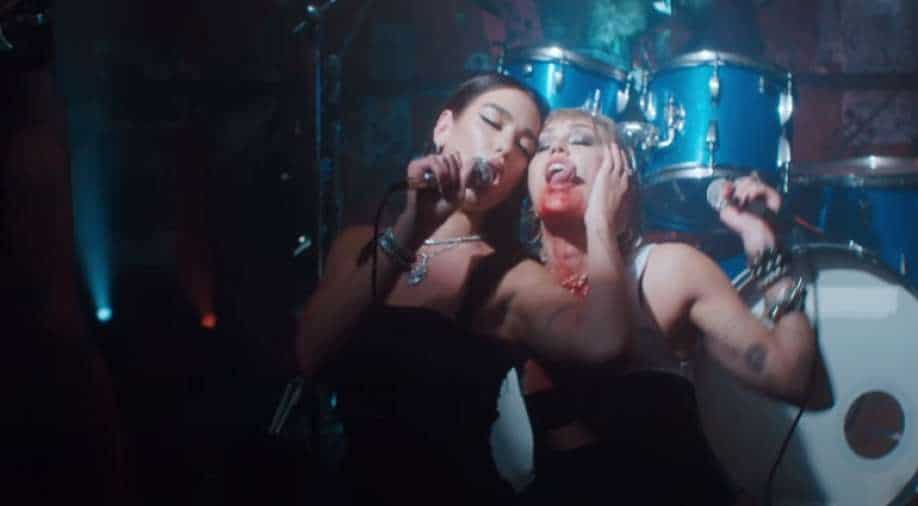 Miley Cyrus and Dua Lipa are on a road trip and no, it's not your regular one.

The young pop-queens recently joined forces for a much-anticipated 'Prisoners', a gritty, provocative, retro-style single off Cyrus' new album Plastic Hearts. 'Prisoner' was released along with the music video, which was directed by Cyrus and Alana O'Herlihy.

The video starts off with an almost Rocky Horror vibe, featuring Cyrus' mouth singing before she gets behind the wheel of a tour bus with Dua Lipa. The two then amp it up and party in the back of the bus like an '80s rock band, complete with outfit changes.

The video gets racy with Miley pouring a jar of maraschino cherries on her, making herself covered in blood and she and Dua start licking each other's bodies and seen having fun with each other.

The video ends with the duo performing a concert in front of adoring fans before a message pops up on the screen: "In loving memory of all my exes, eat s***"

'Plastic Hearts', which will include 12 original tracks and feature a rock sound, in line with her recent live covers of Blondie's 'Heart of Glass' and The Cranberries' 'Zombie,' her chart-bursting single 'Midnight Sky,' and, now Prisoner. 'Plastic Hearts' arrives Nov. 27