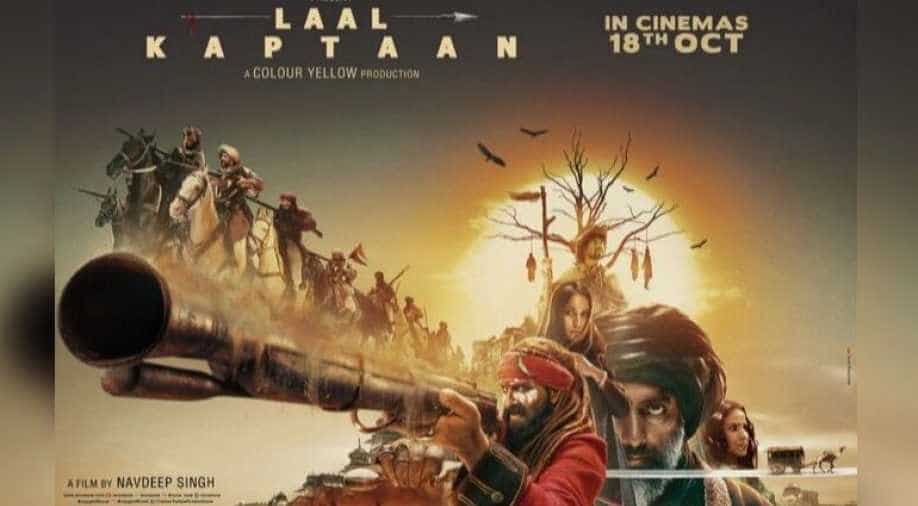 The movie seemingly promises to take viewers on a rollercoaster ride into the dark world of drama, suspense, thriller, and revenge.

The makers of 'Laal Kaptaan' starring Saif Ali Khan as Naga Sadhu unveiled another intriguing poster of the film on Tuesday. The film which will see Saif venturing out on a dramatic journey ridden of drama, revenge, and deceit.

In the poster, the 'Omkar' actor is seen holding a long gun with an angry expression on his face. In the background, fans can catch a glimpse of the other star cast including Deepak Dobriyal, Zoya Hussain who will be seen in prominent roles.

Apart from the ensemble star-cast, the background also included a huge haunted palace and several dead bodies hanging from a big tree.

Film critic and trade analyst Taran Adarsh shared the new poster on his Twitter handle. Some time back the makers of the film released the second trailer titled 'The Chase' which will definitely give you goosebumps. Watch the Laal Kaptaan trailer here.

'The Chase' introduces a new character (Deepak Dobriyal) who finds people by sniffing like a dog. Featured in a wild and rough look, the man then describes his two pet canines.

The movie seemingly promises to take viewers on a rollercoaster ride into the dark world of drama, suspense, thriller, and revenge. Navdeep's directorial is produced by Aanand L Rai and Eros International is set to hit the big screens on October 18.