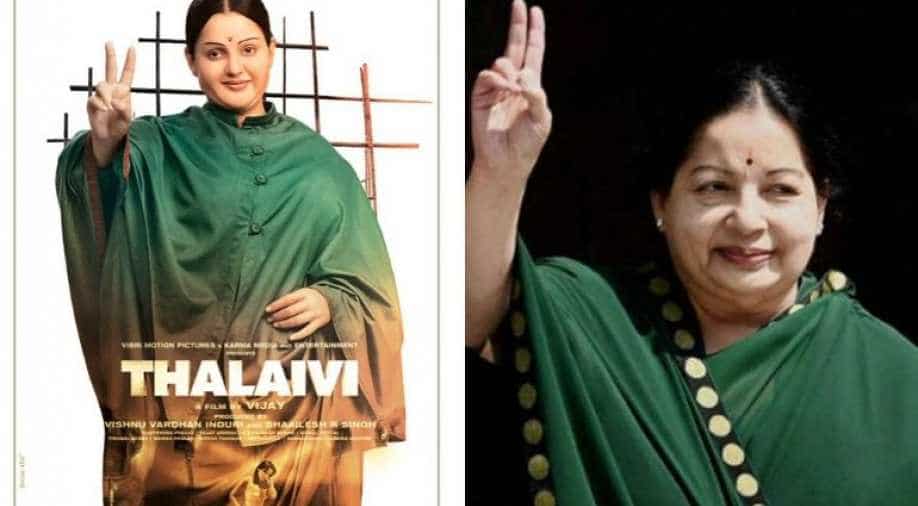 Opening up on the transformation, Kangana Ranaut said, "[When aping a person for cinema], actors usually get the apparel and appearances on point, but not the physical transformation. Vijay wanted me to resemble her as closely as possible."

Ever since the first look poster of Kangana Ranaut starrer ‘Thalaivi’, a biopic on late actor-politician Jayalalithaa has been released, the audience has more so appeared divided on whether they like Ranaut’s transformation for the film. While some find it awe-inspiring, others have called it fake with the poster not looking anything like the actor nor the character she portrays. Watch teaser here.

Opening up on the transformation, Kangana Ranaut said, "[When aping a person for cinema], actors usually get the apparel and appearances on point, but not the physical transformation. Vijay wanted me to resemble her as closely as possible. She [Jayalalithaa] endured a drastic physical transformation in her life. Having grown up as a Bharatanatyam dancer, she had an hour-glass figure. Then, when she joined politics, she had an accident which demanded that she be injected with huge doses of steroids. While we could not depict all of that, we did take measures [to resemble her during these phases]."

Kangana has previously spoken about her struggle with gaining weight and as she had to play the role of Jayalalithaa, she had to look like a woman with a round face with a voluptuous body, unlike her tall and slender frame. The actress gained six kilos for the part and said, "That was needed so as to look voluptuous, especially around the belly and thighs. Since I am tall and skinny, and my face is angular, not round, I had to take mild doses of hormone pills to look different. Of course, I also started eating foods that promote weight gain."

There was more that went into getting the Jayalalithaa look right for the role, in addition to the pills. Kangana also revealed that the makers of the film sought aid from Jason Collins, who has worked on the prosthetics for big-ticket Hollywood action films like ‘Blade Runner 2049’ and ‘Captain Marvel’. She said, "His team made a structure that was suitable to make me look voluptuous. During the portions showcasing her as a young politician, we aimed to only make my face look fuller. As for the rest of the body, it took the team seven hours each day to acquire the look. The hands had to be re-done, and different kinds of pads were used for different parts of the body."