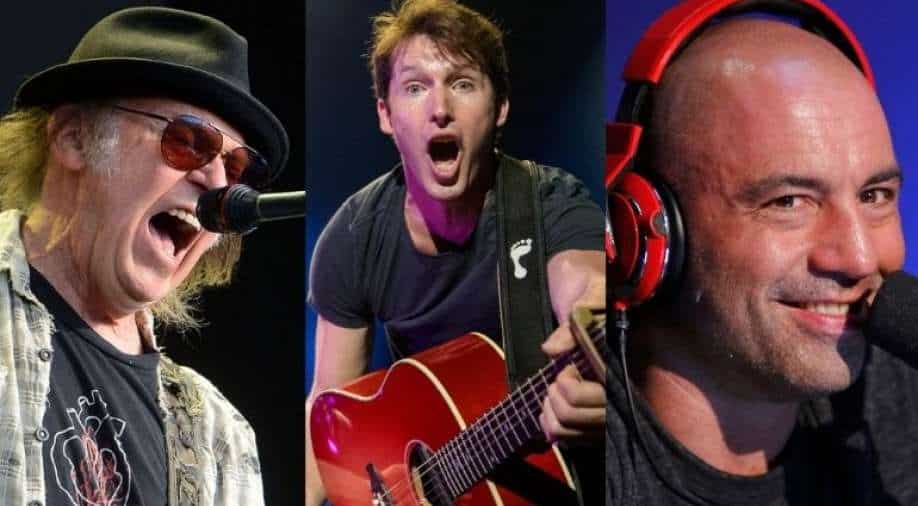 Earlier this week, Neil Young demanded in an open letter to Spotify to remove his music from the platform over Joe Rogan vaccine 'disinformation'.

James Blunt is speaking out against the Joe Rogan podcast and Spotify, but he's doing it with a new twist.

Joining the list of musicians, who are speaking out against Joe Rogan podcast over vaccine 'disinformation'. On Saturday, Blunt threatened to release new music on Spotify if the streamer does not immediately remove the podcast by the popular host Joe Rogan, which has been criticised for promoting anti-vax sentiments.

The 'You’re Beautiful' singer took to Twitter and wrote, ''If @spotify doesn’t immediately remove @joerogan, I will release new music onto the platform. #youwerebeautiful.''

If @spotify doesn’t immediately remove @joerogan, I will release new music onto the platform. #youwerebeautiful

Mitchell announced on her official website with a statement reading, ''Irresponsible people are spreading lies'', and she stands in solidarity with Neil Young.

''I've decided to remove all my music from Spotify. Irresponsible people are spreading lies that are costing people their lives. I stand in solidarity with Neil Young and the global scientific and medical communities on this issue,'' the full statement reads.

Earlier this week, Young demanded in an open letter to Spotify to remove his music from the platform. He said they are spreading vaccine disinformation via the popular podcaster Joe Rogan.

''I want you to let Spotify know immediately TODAY that I want all my music off their platform, '' the singer wrote.

"I am doing this because Spotify is spreading fake information about vaccines -- potentially causing death to those who believe the disinformation being spread by them," he added.

Rogan hosts 'The Joe Rogan Experience' podcast on Spotify, which is the platform’s most-listened-to podcast and racks up millions of listens. Rogan signed a reported $100 million deal with Spotify last year.

As per variety, earlier this month, a group of public health officials urged Spotify to take action against Rogan in an open letter, writing that he has a “concerning history of broadcasting misinformation, particularly regarding the COVID-19 pandemic.”