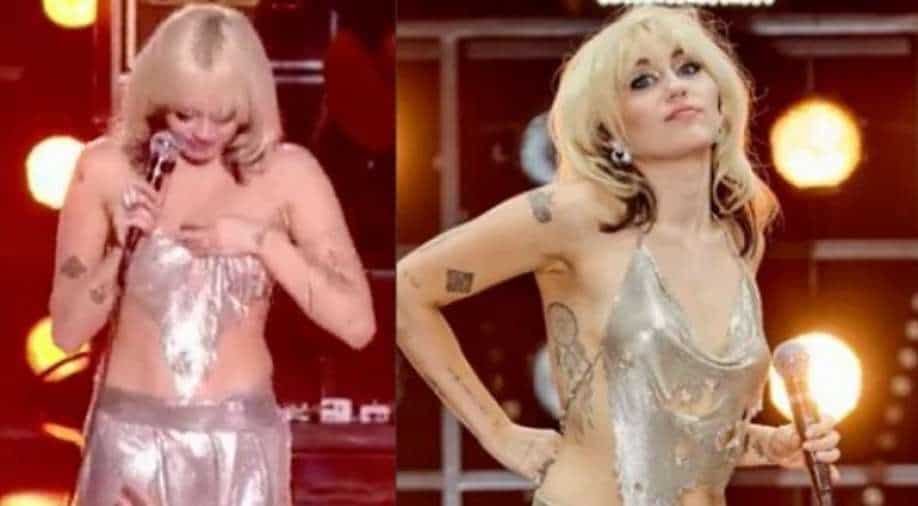 Miley Cyrus rang in New Year's with a rocking performance in Miami featuring some of music’s biggest artists. Although, the night turned into a surprising one as she suffered an awkward wardrobe malfunction and nearly showed more skin than she intended.

During her 'Miley's New Year's Eve Party on NBC, the 29-year-old singer was singing her hit song 'Party In The USA', when she find out, that her top was barely hanging on by a thread. However, Cyrus, while holding her top, handled the situation easily and quickly turned around and walked down the stage to change her attire.

Hardly missing a song, Cyrus quickly returned to the stage in a red jacket. Meanwhile, Miley's co-host, Pete Davidson was quick to make a joke about her wardrobe malfunction on stage. “I heard we may have had a little boob slip. So in solidarity, here’s my boobies,” he said.

"Everybody's definitely looking at me now," Cyrus quipped. "I'm still in the most clothes that I've ever worn on stage," she added in between lyrics.

For the night, the singer was wearing a revealing top made from a thin material and teamed the top with a matching mini skirt.

A number of social media users shared clips of the moment and also commented on her situation. "We're not even 5 minutes into 2022 and Miley already lost her top,'' one user wrote.

While the second one said: "Miley’s top falling off on stage is iconic. Just iconic."

"Tonight's show was all about being flexible, rolling with the punches, and making the best out of even the worst circumstances," Cyrus told the audience at the end of the special, which was filmed with a fully vaccinated crowd.