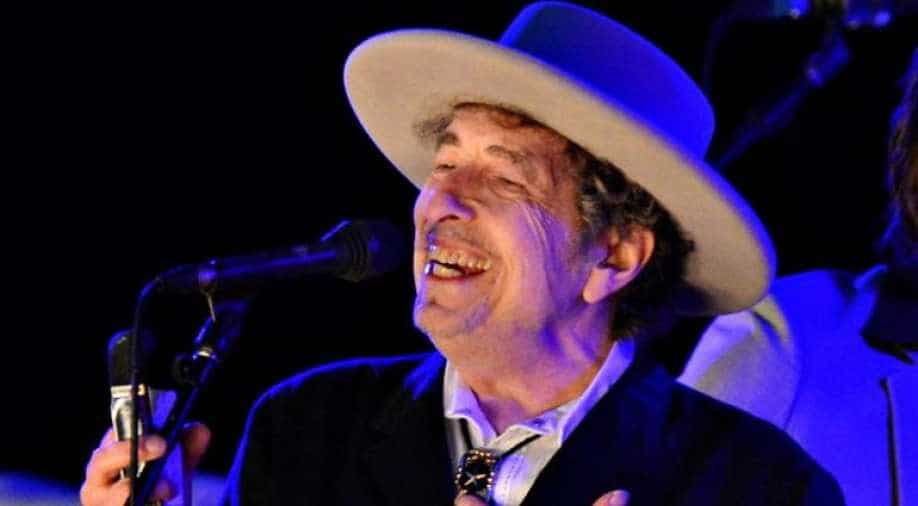 Bob Dylan was recently awarded the Nobel Prize in Literature. Photograph:(Reuters)
Follow Us

The two-day auction will take place in Beverly Hills from June 12-13.

Bob Dylan's handwritten lyrics to 'Lay Lady Lay', a cheeky self-portrait by Kurt Cobain and five guitars designed by the late Eddie Van Halen are among 1,300 items going up for auction in June.

A series of hand-written letters from Britney Spears to her high school boyfriend will also be offered for sale in the Music Icons event at Julien`s Auctions in Beverly Hills.

Emma Stone's daughter name has special connection with her family

The lyrics to Dylan's 1969 song, written in pencil on a sheet of notepaper from a lumber company, carry an estimate of $500,000-600,000.
"That`s the most expensive item in the auction in June. It`s with all the hand notations from Bob Dylan, including chord notations," said Martin Nolan, executive director of Julien's.

Cobain`s self-portrait is a caricature in black felt pen that he drew in 1992 during a tour in Singapore for his punk band Nirvana`s "Nevermind" album.
It depicts the late singer playing the guitar with the words "I don`t know how to play and I don`t give a hoot!" Cobain memorabilia has soared in price in recent years; an acoustic guitar he played in 1993 sold for $6 million last year.

The collection of letters between Spears and her boyfriend Donald 'Reg' Jones were written just as her pop career was about to explode in the late 1990s, and carry an estimate of $4,000-6,000.

"It’s sort of part of her pop culture history and part of her journey, if you will," said Nolan. Five Charvel EVH Art Series electric guitars designed and played by Eddie Van Halen, who died of a stroke in October 2020, are expected to sell for up to $50,000 each.

"He signed each of the guitars. He actually dated the tour that he played each of these individual guitars," said Nolan.
The two-day auction will take place in Beverly Hills from June 12-13.