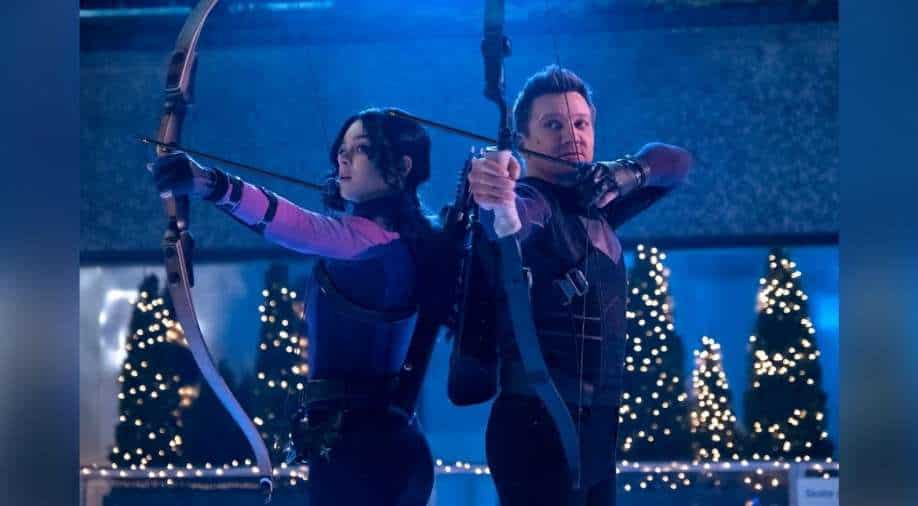 A still from 'Hawkeye'. Image via Disney Marvel Photograph:( WION )

Hawkeye aka Clint Barton- the most underrated Avenger- finally gets his own standalone six-part web series. This time around he has young archer Kate Bishop for company.

Clint Barton aka Hawkeye has been perhaps the most underrated Avenger in Marvel Cinematic Universe. In phase 4, Marvel has provided stand-alone shows and a film on the remaining Avengers. Its new series 'Hawkeye' not only puts focus on Clint Barton( Jeremy Renner) but also introduces a possible contender in young archer Kate Bishop (Hailee Steinfeld).

The writer of this article got an early preview of the first two episodes of the series and from the looks of it, the show seems a fitting story on Hawkeye.

The series opens in flashback, where a young Kate Bishop witnesses Hawkeye fighting aliens in a ravaged New York City and unknowingly saving her life. She loses her father and home in the attack but vows to take up archery in order to protect her mother (Vera Farmigo) and herself.

Years later, Kate is now a loner, living away from her mother who announces her engagement to  Jack Duquesne (Tony Dalton) whom Kate finds too suspicious.

Circumstances lead her to Ronin's costume, which she wears- and lands in deep trouble as she gets embroiled in a fight with a gang of goons. The fight is flashed on TV which Clint Barton watches. Barton is in New York City on a holiday with his children for Christmas and a chance encounter with Kate leads him to realise that young kid is in danger.

Being the protector that he is, Barton has first taken care of his family's safety and then of Kate's safety even when she is fangirling over her encounter with her favourite superhero.

Directed by Rhys Thomas, 'Hawkeye' - in its initial episodes- is an unusual Marvel series. It's set in the holiday season, which is a first for Marvel and it deep dives into a character who is first a family man and then a superhero. Hawkeye wears his superpower lightly on his sleeve and dives straight into the action without any theatrics. Set in post 'Endgame' world, Barton now suffers from a hearing problem and is still mourning the loss of some of his beloved friends.

The series also promises a possible new Avenger - Kate Bishop. Actress Hailee Steinfeld plays Kate Bishop with utmost conviction and adds her unique touch to an otherwise crowded Marvel superhero universe. It's a delight to watch Steinfeld and straight face Renner get into banter about 'brand building' for Hawkeye and take on the goons together.

The show's second episode just gives a glimpse of the excitement that's in store for the audience in the coming weeks. And something tells us, that 'Hawkeye' the series will be a fitting tribute to the most underrated Avenger of all time.

'Hawkeye' is a six part series premiering on November 24 on Disney+Hotstar.