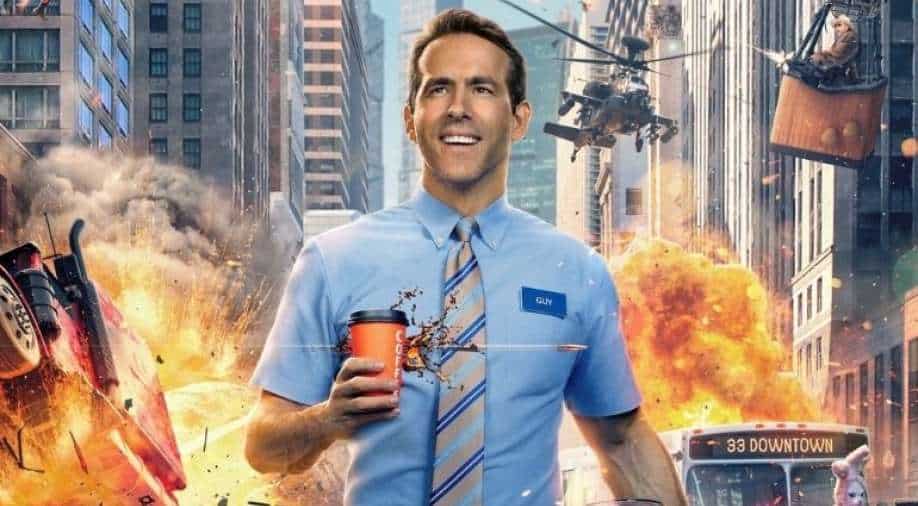 This weekend`s other new nationwide releases, Sony's thriller 'Don't Breathe 2' and MGM's Aretha Franklin biopic 'Respect,' each arrived in line with expectations, though neither did much to galvanize ticket buyers.

Despite concerns the delta variant would keep moviegoers at home, Ryan Reynolds' sci-fi action comedy 'Free Guy' had a better-than-expected start at the domestic box office.

The movie, from Disney and 20th Century Studios, collected $26 million from 4,165 North American theatres. Given its production budget above $100 million, those ticket sales wouldn`t be much to celebrate in pre-pandemic times but isn`t a bad result as a plague sweeps the globe.
Overseas, 'Free Guy' amassed $22.5 million for a global tally of $51 million.

'Free Guy' marks an interesting test for the film exhibition industry because it`s playing exclusively in theatres, which is a rarity these days. Many high-profile films that premiered during the pandemic, such as Marvel`s "Black Widow" and "The Suicide Squad," were available on streaming platforms on the same day as their theatrical debuts. The few films offered only in theatres, like Universal`s

'F9,' Emily Blunt and John Krasinski`s follow-up 'A Quiet Place Part II' and Paramount`s 'G.I. Joe' origin story 'Snake Eyes,' were a sequel in popular film franchises, unlike 'Free Guy,' which is based on an original concept and isn`t part of an existing movie universe.

Though COVID-19 is undoubtedly deterring people from visiting their local multiplex, 'Free Guy' -- which is directed by Shawn Levy ('Stranger Things,' 'Night at the Museum') and co-starring Jodie Comer and Taika Waititi -- had several factors working in its favour. Thanks to strong reviews and an 'A' CinemaScore from audiences, it enjoyed positive word-of-mouth over the weekend.

The PG-13 film also benefitted because it appealed to older males, a demographic that has appeared to be less wary about returning to the big screen. In the case of 'Free Guy,' 59% of opening weekend ticket buyers were male and nearly 80% were above the age of 18. Movies geared toward younger crowds, like Disney's 'Jungle Cruise,' 'Space Jam: A New Legacy,' have been harder sells because families, especially those with unvaccinated children, have been more reluctant to go to theatres.

David A. Gross, who runs the movie consulting firm Franchise Entertainment Research, says 'Free Guy' had "a very good opening under difficult conditions." Still, he points out, the movie business isn`t close to returning to normalcy because COVID-19 cases continue to surge and vaccination efforts have slowed.

"Moviegoing has shown flashes of strength during the summer, but the Delta variant has dampened any sustained improvement above 50%," Gross says. "In a healthy market, movies would be opening considerably higher and holding better."

This weekend`s other new nationwide releases, Sony's thriller 'Don't Breathe 2' and MGM's Aretha Franklin biopic 'Respect,' each arrived in line with expectations, though neither did much to galvanize ticket buyers.

The sequel to 'Don't Breathe' secured second place on box office charts, earning $10.6 million from 3,005 venues in its first three days of release. With a budget of $15 million, it`s a decent start for the R-rated movie that takes place after a deadly home invasion. However, it`s a steep decline from its predecessor, 2016`s 'Don't Breathe,' which debuted at $26.4 million and ended its run with $89 million in North America and $157 million globally.

'Respect' notched the No. 4 spots, with $8.8 million in ticket sales from 3,207 screens in the U.S. and Canada. The film, starring Jennifer Hudson as the Queen of Soul, received good but not great reviews, and it may struggle to achieve profitably in its theatrical run given its $55 million price tag. However, 'Respect' has resonated with audiences, landing a strong 'A' CinemaScore, which could give the film a long life on the big screen.

'Respect' finished the weekend behind Disney's 'Jungle Cruise,' now in its third weekend of release. The family-friendly tentpole, led by Dwayne Johnson and Emily Blunt, added another $9 million to its domestic tally, which currently sits at $82 million. Globally, 'Jungle Cruise' has grossed $154 million to date.

Rounding out the top five is 'The Suicide Squad' with $7.7 million from 4,019 locations, representing a brutal 72% decline from its inaugural weekend. The comic book adaptation, based on a band of less-than-desirable super-villains, is currently on HBO Max and has made $42 million at the domestic box office so far.