'What is the meaning of R?' Ranbir Kapoor teases girlfriend Alia Bhatt at 'Brahmastra' event, watch 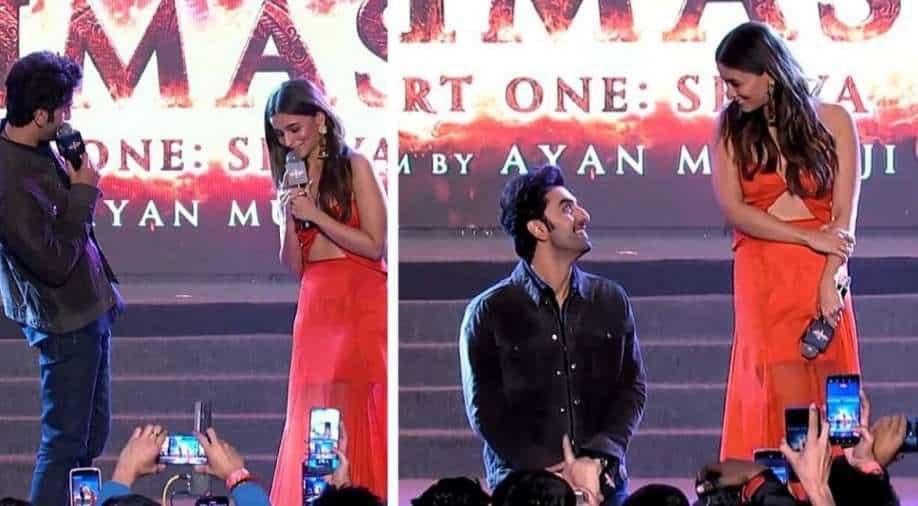 Ranbir Kapoor and Alia Bhatt launched the motion poster of their long-awaited film 'Brahmastra' at a fan event in Delhi on Wednesday evening.

Ranbir Kapoor and Alia Bhatt launched the motion poster of their long-awaited film 'Brahmastra' at a fan event in Delhi on Wednesday evening. While fans were simply excited to watch one of Bollywood's most popular couples share the screen together, Ranbir took the excitement a notch higher as he teased his girlfriend Alia Bhatt on stage about the significance of the letter 'R'.

"What is the meaning of R? What's your connection to the letter?" asked Ranbir tongue firmly in cheek. The question left Alia blushing as fans cheered on.

For those unversed, Alia was asked whether the letter 'R' was lucky for her during the trailer launch event of 'RRR' a few days back. The journalist obviously hinted at her beau Ranbir Kapoor and Alia said, "R is a lovely alphabet but so is A."

On Wednesday as Ranbir asked the same question, Alia blushed and said "R means 8 to me," referring to Ranbir's jersey number. "What does A mean to you," Alia asked in return to which Ranbir said "A stands for Amitabh Bachchan," referring to their co-star in the film.

Ranbir is too much witty man. What a presence of mind he has! 😍

'Brahmastra' has been in the making for a long time and is finally set to release in September 2022. Helmed by Ayan Mukerji, the film is produced by Karan Johar. The film also features Amitabh Bachchan, Mouni Roy and Nagarjuna.