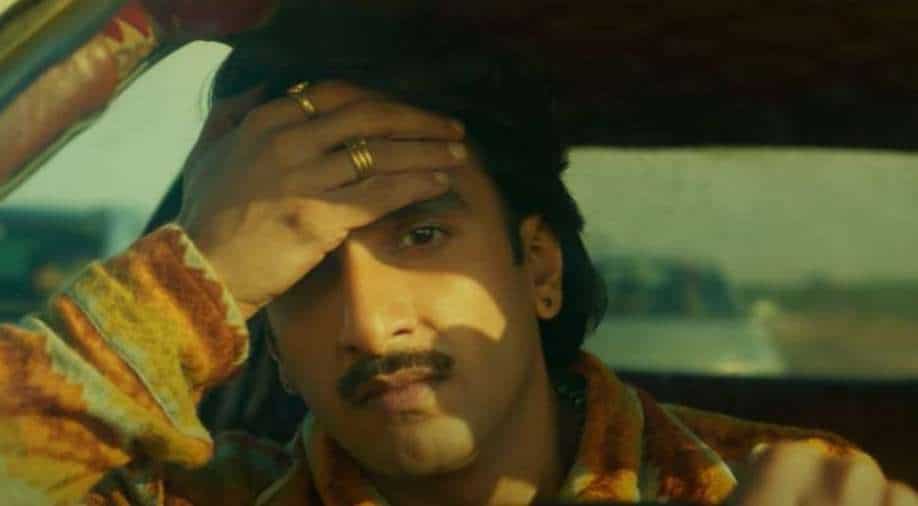 Ranveer Singh in a still from 'Jayeshbhai Jordaar'. Image via YRF Photograph:( Others )

'Jayeshbhai Jordaar' solely rests on Ranveer Singh's shoulder and the man proves his versatility in playing the role effectively. His Jayeshbhai is strikingly opposite to some of the characters the actor has played in the past.

Bollywood has over the years tried to use humour to tackle societal issues. Message-driven films have been the norm for a while now and most have taken the similar route of infusing humour in the narrative. YRF's latest 'Jayeshbhai Jordaar' falls in the same category where Ranveer Singh plays an uncanny superhero, fighting for the rights of women, in a patriarchal world.

Jayesh and his wife Mudra (newcomer Shalini Pandey) are expecting their second child. They live in Pravingarh, a fictitious village in Gujarat, with Jayesh's bossy parents (Boman Irani and Ratna Pathak Shah) and their 9-year-old daughter Siddhi. A soft-spoken, meek man, Jayesh has the burden of being the son of the village chief who wants his son and daughter-in-law to give an heir to continue the family lineage. After six miscarriages (read abortions), the family is now desperate for a son and is ready to appease any god or goat in order to get their wish fulfilled.

When the doctor slyly lets Jayesh know that another girl is on her way, he takes it upon himself to save his wife whom he loves dearly and knows will not be spared by his dominating, conservative parents. With six abortions, Mudra is already weak and Jayesh is aware that another abortion will just lead to her death. And so, he devices a rather convoluted plan to escape with his wife and daughter to a village in Haryana - where due to female infanticide, most men remain unmarried and who want to welcome women with open arms.

As Jayesh escapes with Mudra and Siddhi, he has his entire village and the cops chasing them to teach them a lesson or two. Will he be able to protect his child ultimately forms the rest of the story.

New director and writer Divyang Thakker takes the story to rural Gujarat which may have infrastructurally grown leaps and bounds but is shown to have archaic thinking. It is rather surprising to find Jayesh as a closet feminist, in a society that has alpha males and dominating matriarchs. Everyone around him, his parents and even his wife are more concerned about an heir than he himself. They are all by-products of the same society, and yet Jayesh sticks out like a sore thumb.

The film solely rests on Ranveer's shoulder and the man proves his versatility in playing Jayeshbhai effectively. His Jayeshbhai is strikingly opposite to some of the characters the actor has played in the past. From well built, bare-chested Ram (another Gujarati character) in 'Goliyon ki Raasleela Ram Leela' or the menacing Khilji in 'Padmavat' and the recent Kapil Dev in '83'- Ranveer once again completely transforms himself to play a timid, meek character like Jayeshbhai who is bullied by him the father at all points in time, who is scared to speak about the ill practices of female infanticide to his parents even though he is guilty of being party to it. It's a delight always to watch Ranveer transform on-screen into different characters and 'Jayeshbhai Jordaar' is no different. Despite the film's over the top treatment, it is the film's leading man who truly shines.

Playing his wife, newcomer Shalini Pandey (of 'Arjun Reddy' fame) has a limited scope on screen as the film is written from the man's perspective. Boman Irani as the authoritarian patriarch and Ratna Pathak Shah as his wife are equally effective in their roles. The other actor who shines in the film is  Jia Vaidya, as Jayesh and Mudra's firstborn. The young star plays the feisty, smart alec Siddhi with such ease and it is a delight to watch her on-screen.

Screenplay by Thakker and Anckur Chaudhry has its moments. There are scenes where Mudra realises what life possibly can offer when she is out of the stifling environment of her in-laws' home. The portions where Jayesh play acts to be the bossy, abusive husband just to please his parents draws in laughs too but near the climax, the film somewhat becomes a mish-mash, sometimes oversimplifying a grave issue at hand. The portion where Puneet Issar's character comes in is intended to draw in laughs but it plays out on screen rather clumsily and the effect is downright silly.

Also, the portion where Ranveer gives a strange analogy of wanting a kiss and making women of his village understand consent seems slightly convoluted. The scene is supposed to draw in some tears but is sketchily written and hence has no impact.

Despite the film's desperate need to keep things light though, 'Jayeshbhai Jordaar' works, mainly because Ranveer plays his part so well and so convincingly that he brings a smile to the viewer's face. An issue-based film 'Jayeshbhai Jordaar' sure takes multiple liberties, where everything seems hunky-dory by the end of it, but still manages to win hearts for its message.

'Jayebhai Jordaar' has released in theatres this Friday.