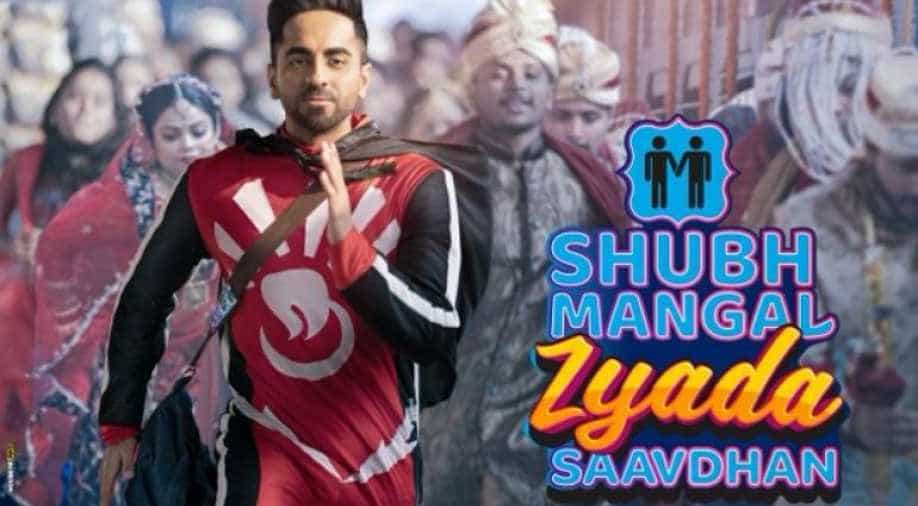 The film which is based on the subject of homosexuality and the taboo surrounding it was earlier scheduled to release on March 13.

The release date of Ayushmann Khurrana's upcoming romantic comedy 'Shubh Mangal Zyada Saavdhan' has been moved to an earlier date of February 21, 2020.

The film which is based on the subject of homosexuality and the taboo surrounding it was earlier scheduled to release on March 13, next year. Ayushmann announced the new release date of the flick on his Twitter handle. 'Shubh Mangal Zyada Saavdhan' teaser: Look who is playing Ayushmann Khurrana's love interest

"Bhaagte Bhagate aa rahe hain hum, #ShubhMangalZyadaSaavdhan - Releasing on 21st FEB 2020," he wrote. 'Shubh Mangal Zyada Saavdhan' seems to be about 'Pyaar vs Sanskaar' where the 35-year-old star will be seen romancing Jitendra Kumar as he is playing a homosexual in the film.

In September, Ayushmann introduced the characters of the film wherein Jitendra is playing Aman Tripathi and the 'Bala' star is will be seen as Kartik Singh.

The upcoming film also stars Neena Gupta and Gajraj Rao. The two had earlier shared screen space with Ayushmann in the 2018 hit 'Badhaai Ho'. Directed by Hitesh Kewalya, the upcoming film is a sequel of 2017 blockbuster 'Shubh Mangal Saavdhan'.

The much-awaited film is being produced by Bhushan Kumar and Aanand L Rai, who also bankrolled the prequel. Chhapaak, Prithviraj, Laxmmi Bomb: From Eid to Christmas, 2020 is a year full of box office clashes