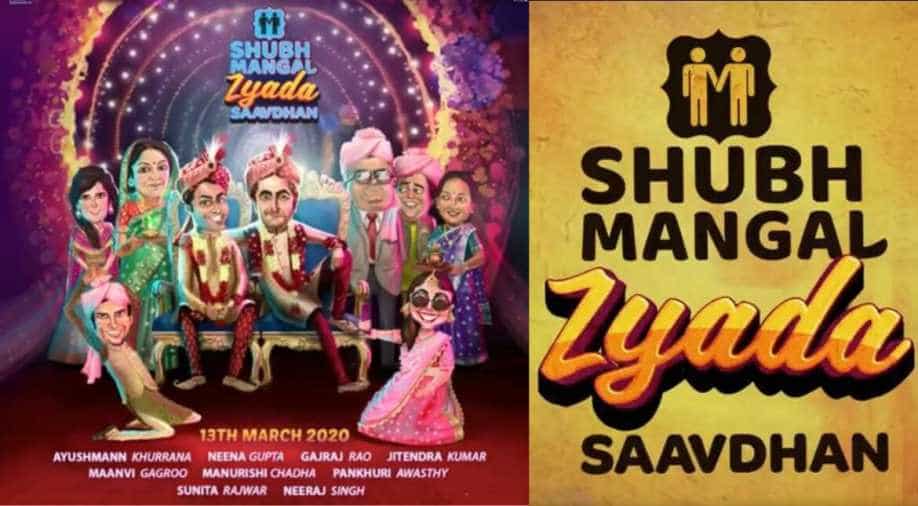 Ayushmann Khurrana will be seen romancing Jitendra Kumar as he is playing a homosexual in the film.

'Shubh Mangal Zyada Saavdhan' seems to be about 'Pyaar vs Sanskaar' where Ayushmann Khurrana will be seen romancing Jitendra Kumar as he is playing a homosexual in the film.

The actor took his fans to the Allahabad's Tripathi again stadium to introduce them to the upcoming film's characters. His quirky way of revealing the cast featured an animated clip on Twitter.

The video starts with a comic narration of the Kaali Gobi match between Pyaar vs Sanskar. Gajrao Rao is presented as Shankar Tripathi, head of the family with his wife Sunaina Tripathi (Neena Gupta), who passes on the gobi to their to-be daughter-in-law Kusum (Pankhuri Awasthy).

Then comes Jitendra Kumar as Aman Tripathi who missed catching the gobi as he had his gaze fixed on Kartik Singh (Ayushmann Khurrana). Manurishi Chaddha will be playing Chaman Tripathi, Shankar's younger brother with Sunita Rajwar essaying the role of his wife.

Maanvi Gagroo and Neeraj Singh are also a part of the film's cast as Google Tripathi and Keshav respectively. Hitesh Kewalya's directorial went on floors earlier this month and will hit big screens on March 13, next year.

Kumar is best known for his role in TVF's numerous shows including 'Pitchers', 'Kota Factory' and parody on Arvind Kejriwal. He made his debut in Shweta Tripathi starrer 'Gone Kesh' last year.

The sequel to the 2017 hit 'Shubh Mangal Saavdhan' is being produced by Bhushan Kumar and Anand L. Rai.