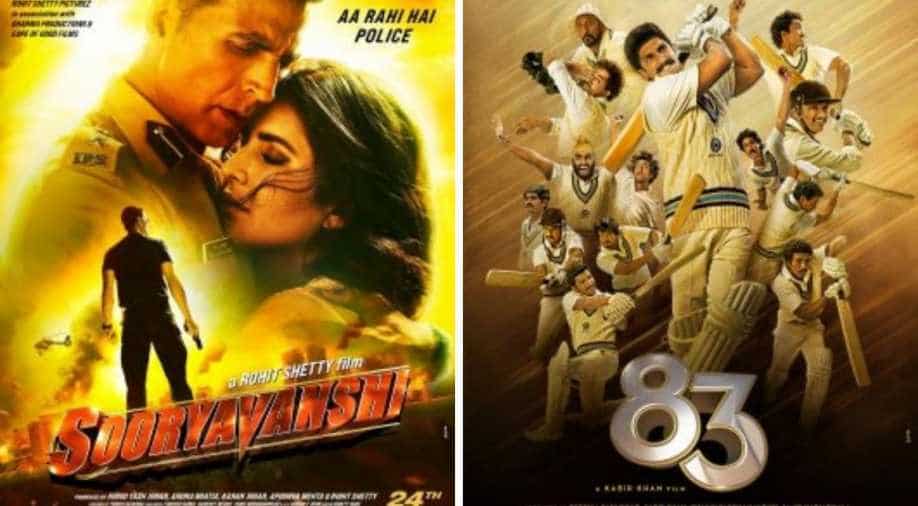 'Sooryavanshi' was originally scheduled to release on March 24, while '83' was set to hit the cinema houses on April 10.

Akshay Kumar 'Sooryawanshi' and Ranveer Singh '83' is kept on pushing due to covid 19 pandemic. As of now, both the movies are pushed to next year and will release in the first quarter of 2021.

Earlier, their were reports saying that '83' will release in theatres on Christmas this year and Akshay cop film is been pushed to 2021. However, the makers have now changed their decision.

Trade analyst Taran Adarsh shared the news and wrote, "ALL EYES ON FIRST QUARTER OF 2021... #Sooryavanshi and #83TheFilm to release in *cinemas* NEXT YEAR [2021]... Both will release *before* 31 March 2021... Release dates *NOT* finalised yet (sic)." The release dates are not finalised yet.

'Sooryavanshi' was originally scheduled to release on March 24, while '83' was set to hit the cinema houses on April 10.

Directed by Kabir Khan the sports-drama '83' features Ranveer Singh as Kapil Dev. The film revisits India`s first World Cup win in 1983. On the other hand, 'Sooryavanshi' is another commercial outing from Rohit Shetty`s cop-universe. It features Akshay Kumar and Katrina Kaif in the lead roles.

As per the current guidelines, the theatres are opened with only 50% capacity. It'll be interesting to see if the makers stick to their theatre release only policy, or if the pandemic forces them to give these mega- releases to OTT platforms.