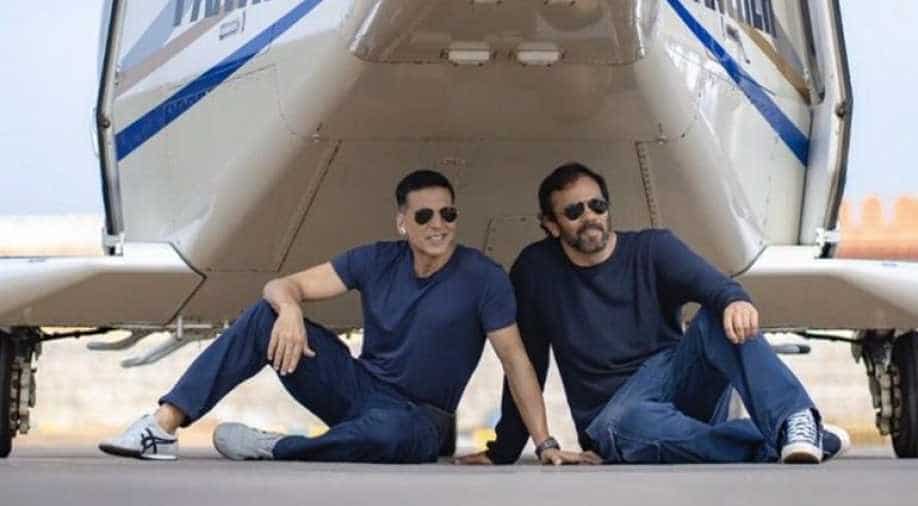 The cop thriller's star cast also includes Ranveer Singh, Ajay Devgn, Gulshan Grover, and Sikander Kher among others. It is set to hit big screens on March 27 next year.

After over six months of hectic shoots and busy schedules, Akshay Kumar had his last day on the sets of  'Sooryavanshi' on Saturday as he bid adieu to the "cop universe" of Rohit Shetty.

Posing with his director under a Helicopter, Akshay in the picture shared on Instagram is seen twinning with Rohit in the all Blue look. "Last Day, Last Shot, Last Stunt of #Sooryavanshi. It's been an incredible experience to be a part of Rohit Shetty's Cop Universe," he captioned the picture.

Last Day, Last Shot, Last Stunt of #Sooryavanshi👊🏽 It's been an incredible experience to be a part of Rohit Shetty's Cop Universe... We’re excited for you to witness it at the cinema, it’s gonna blow your mind🤯 We hope 🤞🏻🙃 @katrinakaif @itsrohitshetty @karanjohar @reliance.entertainment @rohitshettypicturez @dharmamovies #CapeOfGoodFilms

And just as excited as his fans are to catch the movie in theatres, so is Akshay as he expressed that the film is "gonna blow your mind". "We hope," he added at the end.

Responding to the 'Khiladi' star's post, Rohit also gushed praises on him writing, "As Akshay Kumar gave his Last shot today for Our Cop Universe 'Sooryavanshi', It takes me back to 9 years ago in 2010 when Golmaal 3 became a massive hit."He shared that the idea of 'Sooryavanshi' was with him since 'Golmaal 3', however, he ended up making 'Singham' with Ajay Devgn.

"I never imagined that Singham's journey would ultimately weave in such magnificent characters like the notorious Ranveer Singh as Simmba and now the Dynamic Akshay Kumar as Sooryavanshi, becoming the country's First cinematic Cop Universe," he added.

"And today 9 years later when I wrap my last shot with Akshay playing Sooryavanshi it magically coincides with the day we announce our next venture - Golmaal FIVE," the filmmaker continued.

The shooting of the multi-starrer began in May and since then the team has been active in sharing their schedules with fans on social media.Earlier in June, Akshay had shot a speedy action scene in Bangkok and also performed a daredevil Helicopter stunt a day later.

The film is special not only because of the ensemble cast and its unmissable action, but because it is likely to feature the remake of the iconic 90s song 'Tip Tip Barsa Paani' which will reportedly feature Katrina Kaif opposite Akshay.