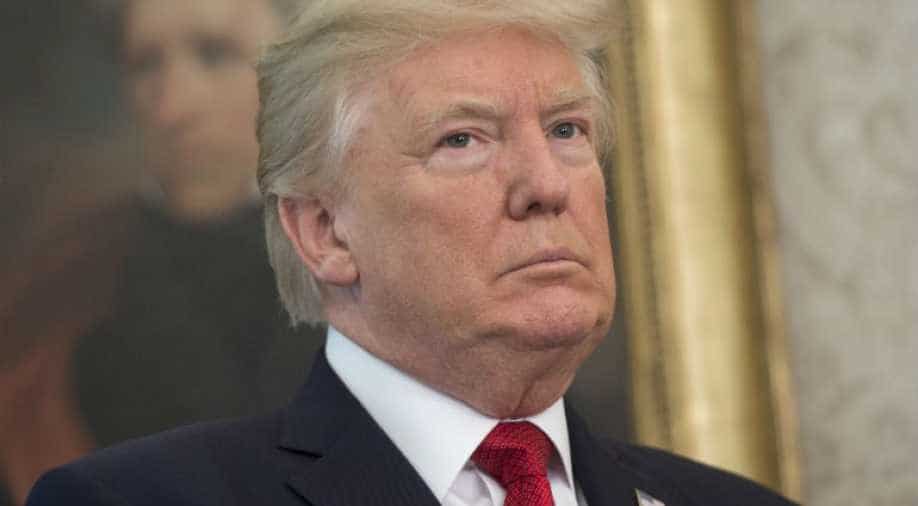 President Donald Trump?embarks this week on a long and challenging Asian tour set to be dominated by the North Korean nuclear threat Photograph:(AFP)
Follow Us

The White House has sought to emphasize the length of the five-nation tour?the longest by any US president since George H W?Bush in 1991 as evidence of Trump's commitment to engaging with the region.

Weakened on the domestic front, President Donald Trump embarks this week on a long and challenging Asian tour set to be dominated by the North Korean nuclear threat after months of verbal escalation between Washington and Pyongyang.

Taking him from Japan to South Korea, China, Vietnam and the Philippines, the bumper November 3-14 trip is the US leader's first to the region since his election exactly a year ago.

On his agenda are several key regional summits but also closely-watched face to face meetings, be it with his powerful Chinese counterpart Xi Jinping, or the controversial Philippines strongman, Rodrigo Duterte.

With his approval ratings languishing at record lows, will the 71-year-old president manage to leave behind the spectacular recent developments in the probe into Russian election meddling? Will he forego his morning tweeting for the duration of the 12-day trip?

The White House has sought to emphasize the length of the five-nation tour the longest by any US president since George H W Bush in 1991 as evidence of Trump's commitment to engaging with the region.

But doubts linger on that point, most notably on the economic front following Trump's abrupt decision three days into office to pull out of the TPP trans-Pacific trade deal, which unsettled several signatories and Japan in particular.

Supporters of the deal, struck in 2015 by 12 nations who together account for 40 per cent of the world economy, had championed it as a vital counterweight to the growing influence of China.

After a brief stopover in Hawaii, Trump will Sunday join his "friend" Shinzo Abe for a new round of golf following the one they shared in Florida last February before a series of meetings aimed at underscoring the strength of the US-Japanese alliance.

In South Korea, Trump unlike many of his predecessors will not travel to the Demilitarized Zone dividing the Korean peninsula, instead delivering what is set to be a closely scrutinized speech before the country's national assembly.

Seoul will be hoping during trump's two-day visit starting Tuesday for a reaffirmation of its alliance with Washington, at a time when the North is pushing ahead with its nuclear and ballistic missile programs in defiance of the international community.

It is also seeking reassurances of a different nature.

"South Koreans also want to know that the United States is not going to prematurely or unnecessarily draw South Korea into any kind of military conflict," said Scott Snyder of the New York-based think-tank the Council on Foreign Relations.

Since taking office, the US president has vowed to unleash "fire and fury" if threatened by Kim Jong-Un's regime, has contradicted his top diplomat about direct contacts with Pyongyang, and sent out a string of cryptic messages "We'll do what has to be done!"  that ultimately left observers guessing at his true intentions toward North Korea.

For Michael O'Hanlon, a foreign policy fellow at the Brookings Institution, Trump has been "ad-libbing" on what has emerged as the major foreign policy challenge of his presidency so far.

"And people like (Defense) Secretary (Jim) Mattis and Secretary (of State Rex) Tillerson are trying to somehow hold things together and make sense of it and keep the lid on, as best they can."

After Seoul, the 45th US president heads to Beijing next Wednesday to meet his counterpart Xi Jinping just weeks after he was formally handed a second term in power, solidifying his grip on the world's most populous nation.

"He's a powerful man," Trump recently declared of Xi. "I happen to think he's a very good person," added the US president, who despite his campaign rhetoric railing against China's trade imbalance with the United States has so far trodden relatively carefully in dealing with the Asian giant.

"The Chinese are basically quite content with the status quo of the economic relationship," said David Dollar, an expert on China's economy at the Brookings Institution, who predicts Xi will grant Trump a lavish welcome but few concessions.

In Vietnam on Friday, Trump will take part in an APEC summit in Danang, and deliver a speech on his vision for a "free and open Indo-Pacific region" that is eagerly awaited by the business community.

But following its rejection of the TPP, America's roadmap for engaging with the region economically remains unclear.

"I don't see much hope for many new bilateral trade agreements to be negotiated at this point," summed up Elizabeth Economy of the Council on Foreign Relations.

Wrapping up his trip in Manila on November 12-13, Trump will take part in the ASEAN summit of South East Asian leaders, and will hold what could turn out to be a colorful one-on-one with the outspoken Duterte, whose bloody crackdown on alleged drug gang members has drawn widespread condemnation.

"We're going to the Philippines, where the previous administration was not exactly welcome," Trump crowed earlier this week.

Critics note that while Barack Obama was among the many international critics of Duterte's drug war, his successor in the White House has struck a far more conciliatory tone, praising the controversial leader as doing an "unbelievable job on the drug problem.''