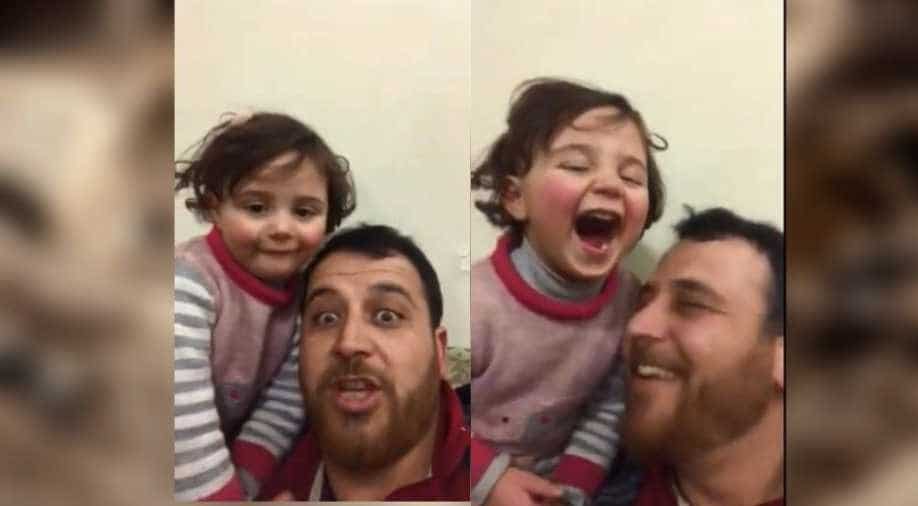 A screengrab from the video which has now gone viral on social media. Photograph:( Others )

The video evoked emotional response among users as it got viral. Several called for an end to violence in the region after seeing the video.

To help her daughter cope with Syria's long-running war trauma, a Syrian father has turned the experience of airstrikes and shelling into a game.

The father Abdullah al-Muhammad who is a video journalist by profession taught her three-year-old a bittersweet game in which both laugh at the sound of shelling in Idlib.

The video, posted by Muhammad on social media this week, shows him and his three-year-old daughter Salwa laughing adorably as an explosion is heard outside their home.

The video evoked emotional response from viewers as it got viral. Several called for an end to violence in the region after seeing the video.

This is Selva and her father Abdullah.

Abdullah created a game for his 4 year old daughter so that Selva is not scared when bombs explode.

They laugh together at the explosion.

This is life in Syria and it breaks my heart.pic.twitter.com/t7CB2M0ooZ

Syrian father helps daughter cope with the sounds of war.
The girl has to laugh as she hears the explosion.

Mohammad: "Does it make you laugh?"
Salwa: "Yes it is funny."

Talking about this "game", Muhammad told Reuters that when he moved from Sarmada district to Idlib, Salwa would become startled when she would hear the sound of a bombing near their home. After which he asked nearby children to light a firecracker to show Salwa that the noise is just for fun.

"They started laughing, and she started laughing and saw that the thing is just a game," Muhammad said, adding, "Two days later the air force hit, and I immediately told her not to fear, it's just kids detonating fire-crackers."

"I turn the matter into a game so that she won't be afraid, " said.

Since then, Mohammad has continued using the same method to keep her daughter away from the trauma of Syria's nine-year-old war. The technique seems to have worked for Muhammad and his daughter.

"It's not scary, it's funny," Salwa said in the video.

Syrian troops supported by Russian warplanes have been advancing since December against the last rebel bastions in Idlib and Aleppo provinces in what could be one of the final chapters of the nine-year-old civil war.

Several studies have proved that children in Syria suffer a severe form of psychological trauma that can cause life-long damage due to the unending war in the region.