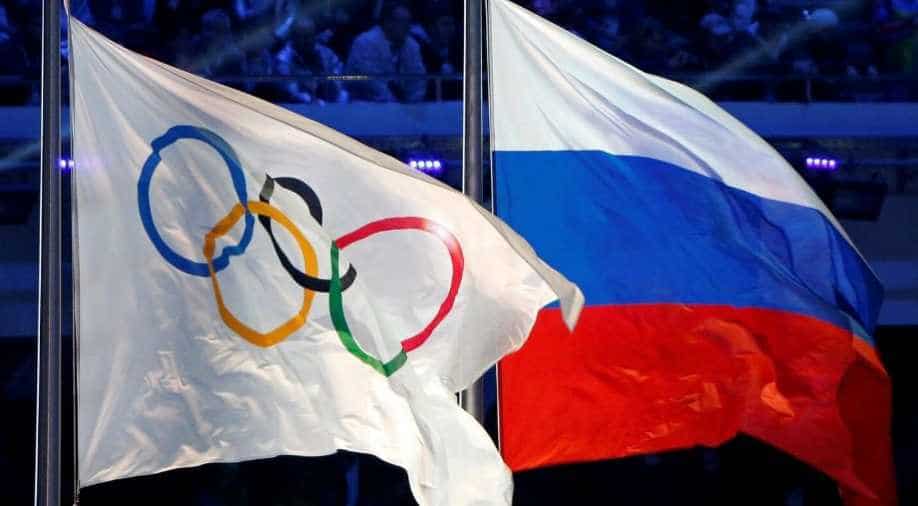 The Russian national flag (R) and the Olympic flag are seen during the closing ceremony for the 2014 Sochi Winter Olympics, Russia. Photograph:( Reuters )

Russia should not try to delay the start of its four-year ban from major sporting events for doping as it will only miss out on future events instead, the head of the World Anti-Doping Agency's independent Compliance Review Committee said on Friday.

Even if it manages to extend any appeal proceedings until next summer and send athletes to the Tokyo 2020 Olympics in the meantime, it would be banned from the Paris 2024 Games instead, Jonathan Taylor told Reuters in an interview.

"We allow due process. They have to have their day in court. If that causes a delay, if it means it misses Tokyo, it does not lose its power as it covers Paris 2024. That's the stick we are using so they don't drag it out," Taylor said.

WADA banned Russia from the world's top sporting events on Monday for four years - including the next summer and winter Olympics and the 2022 soccer World Cup - for tampering with doping tests.

A final decision on the ban, however, will be taken by the Court of Arbitration for Sport, where Russia is planning to appeal the sanctions.

WADA took action after concluding that Moscow had planted fake evidence and deleted files linked to positive doping tests in laboratory data that could have helped identify drug cheats.

The ban means Russian athletes will not be able to perform at the Olympics in Tokyo next year under their own flag and national anthem. Individual athletes with proven clean records may compete as neutral participants.

A long legal battle over the ban could potentially last months and even until Tokyo in July, a similar scenario to the 2016 Rio de Janeiro Olympics, where Russians tried to earn the right to participate through CAS.

"It is a court case and there are no guarantees," Taylor, who headed WADA's independent Compliance Review Committee into Russia, said.

"The standard requires an expedited hearing, but also a fair hearing."

"I would hope and expect it will be done by March or April but I cannot guarantee that. There is a risk the Russians will drag it out," he said.

Many western athletes' groups and anti-doping bodies among others have been critical of WADA's decision, saying it was far too soft on Russia.

But Taylor said that while he accepted criticism that his committee had not gone far enough and banned the Russians outright, he still thought the decision went further than expected.

"In Russia they have reacted saying it is outrageous and a harsh ban. I do think it is a ban that strikes a blow to the pride of the nation," he said.

But Russia will play at Euro 2020 and host games as well, while also staging the 2021 Champions League final - all events that are not covered by the ban, which includes Olympics and world championships but not continental competitions.

"There are some who say the Euros and the Champions League should be covered. We had to draw the line somewhere. No one expected us to go as far as world championships, and now they are criticising us for not having gone further."