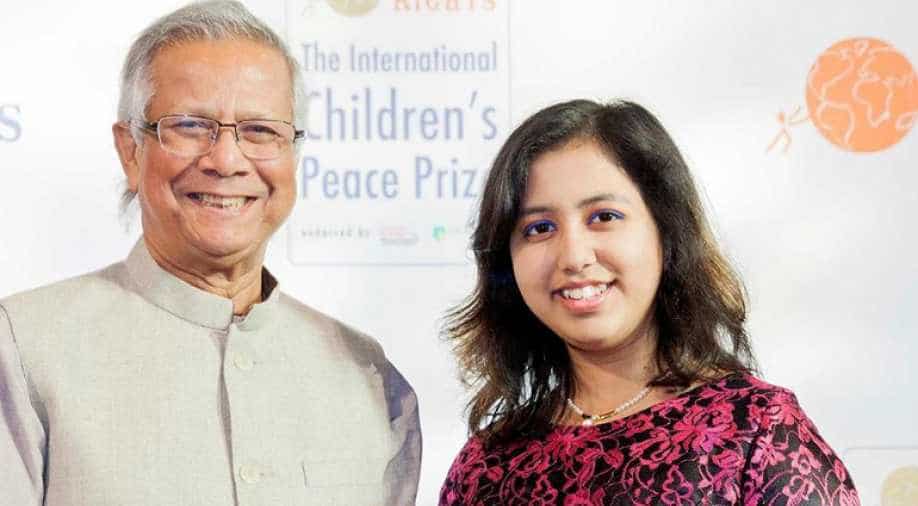 Basu is being honoured for the work done by her child-run organisation Green Hope, based in the United Arab Emirates, which now has more than 1,000 volunteers in 10 countries around the world. Photograph:(Facebook)
Follow Us

Basu is being honoured for the work done by her child-run organisation Green Hope, based in the United Arab Emirates, which now has more than 1,000 volunteers in 10 countries around the world.

The ambitious teen founded Green Hope at the age of 12, and within four years managed several successful environmental projects, including planting 5,000 trees in Colombia, France, Mexico, Nepal, Oman and the United States.

"What started as one young girl's initiative is now a sizeable organisation... with a management team comprised entirely of children who even use their own pocket money to fund their environmental activities," said the competition's organisers KidsRights.

Apart from planting trees, Green Hope also focuses on activities such as cleaning up mangrove swamps around the UAE, said Basu, who hoped to draw special attention to the threats facing fragile coastal forests.

Mangroves are considered vital to coral reefs and fisheries and serve as important buffers for coastal cities against rising sea levels and storm surges.

Basu, who was inspired by her grandmother's rooftop garden in Kolkata, India, received the prize from 2006 Nobel Peace laureate and anti-poverty campaigner Muhammad Yunus.

Basu said on Friday ecologists should "not lose hope" in their battle to fight climate change, despite scepticism from world leaders including US President-elect Donald Trump.

"These are uncertain times, but I want to tell people to continue their work and not bother about it," Basu, born in Dubai to Indian parents, told AFP in The Hague, where she was awarded the prestigious International Children's Peace Prize.

World leaders, CEOs, negotiators and activists attending a UN conference earlier this month in Marrakesh voiced concern following the election of Trump, who has vowed to withdraw the US from a hard-won global agreement on climate change.

"Do not stop what you're doing. No matter what happens, we have to continue to save the planet," the 16-year-old said shortly before being handed the prize at a glittering ceremony at a medieval banquet hall in the city.

The prize is awarded annually "to a child who fights courageously for children's rights," KidsRights said. It also includes a 100,000 euro ($106,000) investment for projects in the winner's home country.

Past winners include Pakistani education campaigner Malala Yousafzai and the prize's first recipient, Nkosi Johnson, a South African boy who shone a light on the plight of children with HIV/AIDS.