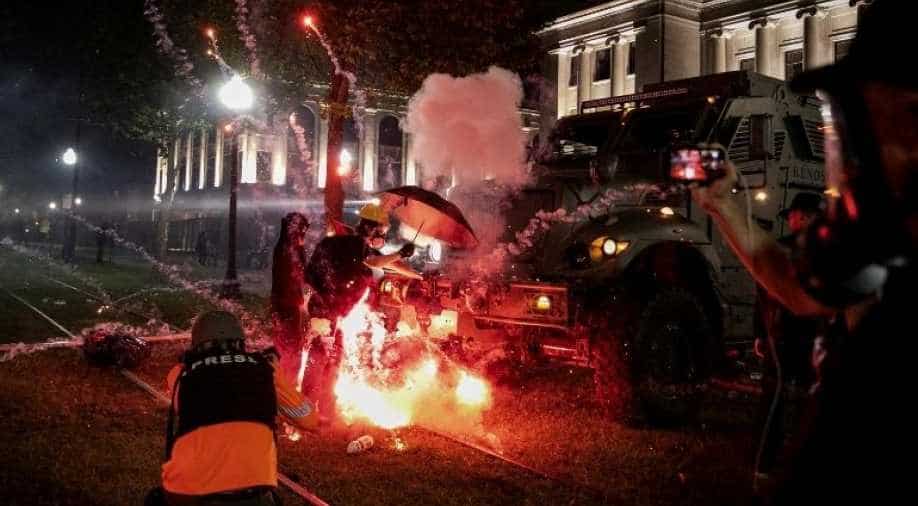 An incendiary device goes off in front of a Kenosha Country Sheriff Vehicle as demonstrators take part in a protest following the police shooting of Jacob Blake, a Black man, in Kenosha, Wisconsin Photograph:( Reuters )

Police in riot gear fired rubber bullets, tear gas and flash-bang rounds as they skirmished after dark with 300 to 400 demonstrators defying a dawn-to-dusk curfew outside a courthouse and adjacent park in downtown Kenosha.

Two people were shot dead on Tuesday night in the US city of Kenosha, police said, as groups clashed during protests over the shooting of a black man.

"The shooting resulted in two fatalities and a third gunshot victim was transported to a hospital with serious but non-life threatening injuries," the Kenosha police department said in a tweet

Social media videos posted early Wednesday showed a gun battle involving civilians, with several people rushing a man with a long gun who apparently had been knocked to the ground. The video shows him firing at the people rushing towards him, one of whom falls to the ground. Other shots are heard in the background.

Police in riot gear fired rubber bullets, tear gas and flash-bang rounds as they skirmished after dark with 300 to 400 demonstrators defying a dawn-to-dusk curfew outside a courthouse and adjacent park in downtown Kenosha.

The Kenosha County Sheriff's Department also deployed at least four armored patrol vehicles fitted with roof turrets from which deputies fired tear gas canisters into the crowd, many of whom hurled water bottles, bricks, firecrackers and other objects back at police. 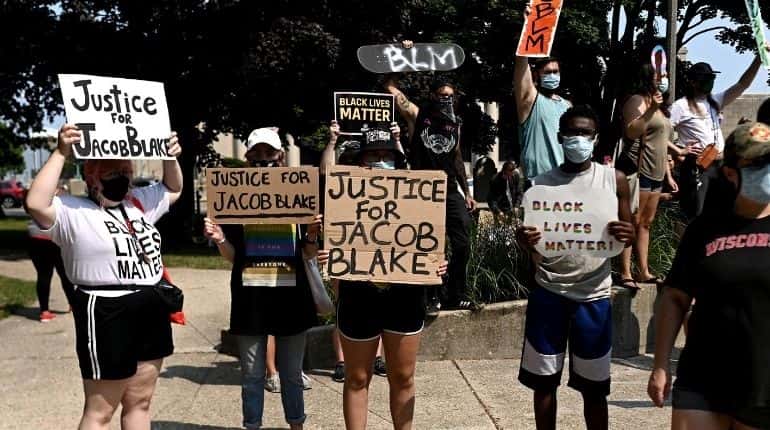 People hold placards as they gather for a protest outside the Kenosha County Courthouse after a Black man, identified as Jacob Blake, was shot several times by police last night in Kenosha, Wisconsin

But there was no immediate sign of buildings or cars being set ablaze, as happened on Monday night.

About three hours after declaring the protest an unlawful assembly, authorities had managed to push Tuesday night's crowd out of the downtown park, with demonstrators scattering down streets.

The disturbances came hours after Wisconsin Governor Tony Evers declared a state of emergency and vowed to deploy additional National Guard troops in a bid to restore order in the town, while the mother of the man who was shot, Jacob Blake Jr, publicly appealed for calm.

Blake, 29, a father of six, was struck from behind at point-blank range in a hail of bullets fired on Sunday by police who were following him with guns drawn as he walked away from officers to his car and opened a door to the vehicle.

Three of his young sons inside the automobile - aged 3, 5 and 8 - witnessed their father being gunned down, according to civil rights attorney Ben Crump, who represents the Blake family.

A bystander captured the encounter in video footage that immediately went viral, unleashing outrage over the latest in a long series of instances in which police have been accused of using indiscriminate lethal force against African Americans.

Blake, who had been attempting to break up a quarrel between two women, was struck by four of seven gunshots fired at him, all by one officer, and there was "no indication he was armed," Crump said in an ABC News interview on Tuesday.

The police have not explained why Blake was shot.

At an afternoon news conference, Blake's parents voiced anguish over the shooting while decrying two previous nights of looting, vandalism and arson that overshadowed peaceful protests in Kenosha, a city of about 100,000 people 40 miles south of Milwaukee.

"They shot my son seven times. Seven times! Like he didn't matter," Jacob Blake Sr., trembling with emotion, told reporters. "My son matters. He's a human being and he matters."

Julia Jackson, Blake's mother, said her son "has been fighting for his life," but called for unity, saying she was praying for police officers. She also said her son would disapprove of damage done to the city, declaring, "It doesn't reflect my son or my family."

Officials, blaming outside agitators or much of the lawlessness surrounding demonstrations, said some three dozen fires were set on Monday night, mostly in an uptown, predominantly minority neighborhood where numerous businesses were burned.

Seeking to restrict an influx of traffic, authorities blocked off all exit ramps leading from Interstate-94 into Kenosha County from the nearby city of Racine south to the Illinois border along Lake Michigan.

Traffic barriers and heavy fencing were also erected on Tuesday around a downtown cluster of public buildings, including the courthouse, police department and sheriff's headquarters, to protect them from attack.

Crump and another lawyer for the Blake family, Patrick Salvi II, said bullets shattered some of Blake's vertebrae, leaving him paralyzed from the waist down - possibly permanently. He also suffered gunshot wounds to his stomach and gastrointestinal tract, requiring surgeons to remove most of his colon and small intestine, and sustained damage to his kidney, liver and an arm, they said.

"It's going to take a miracle for Jacob Blake Jr to ever walk again," Crump said, adding that the family intended to bring a lawsuit "to hold wrongdoers accountable."

Family and protesters are demanding that the officers involved in the shooting, who have been placed on administrative leave, be fired and prosecuted.

Video captured by a neighbor shows Blake walking toward the driver's side door of his SUV, away from two officers who were pointing guns at his back. After he opens the door and leans into the car, seven shots ring out, with one of the officers tugging at his shirt.

The shooting is under investigation by the Wisconsin Justice Department, which has released no details. Kenosha police have referred all questions to state investigators.