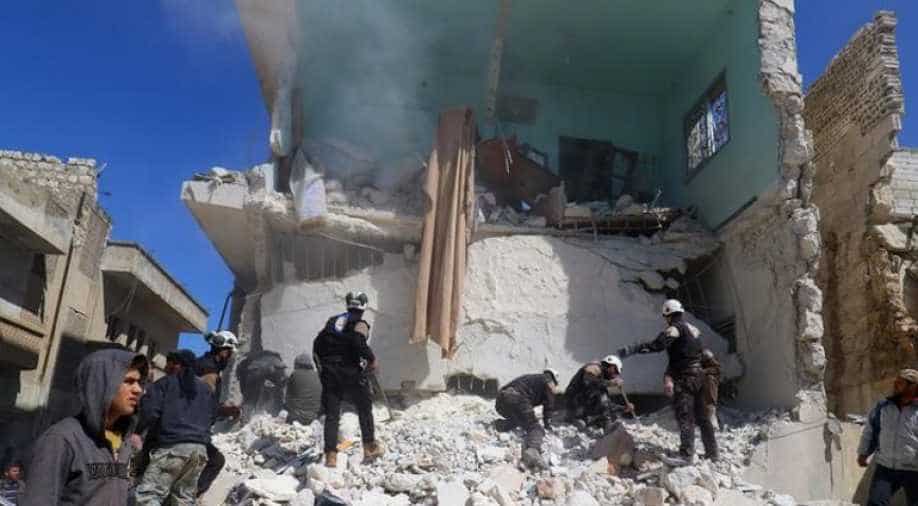 The Syrian Observatory for Human Rights said those killed in the town of Khan Sheikhun, in Idlib province, had died from the effects of the gas, adding that dozens more suffered respiratory problems and other symptoms. Photograph:(Reuters)
Follow Us

The 19 died in strikes on a military convoy in the Jabal al-Zawiya area and a base near Maaret al-Numan city, the Syrian Observatory for Human Rights said.

The report came hours after Turkey shot down two Syrian warplanes, in an escalating offensive against the Damascus government in Idlib, where Islamist fighters backed by Ankara pose the biggest obstacle to Damascus seizing back control over all of Syria.

Following weeks of violence in the province, Turkey confirmed a full military operation against Russian-backed Syrian forces after 34 Turkish soldiers were killed last week in an airstrike blamed on Damascus.

However Ankara has insisted it does not want to clash directly with Moscow.

Syrian state media said Turkish forces "targeted" two of its planes over Idlib. A rebel group and the Syrian Observatory for Human Rights, a Britain-based war monitor, both said the planes had been downed.

The situation in Idlib was already volatile as the government supported by Russian air power pressed an assault on the region in a bid to retake the last opposition enclave in a nine-year civil war.

The confrontation between the Russia-backed Syrian forces and NATO-member Turkey, which supports Syrian rebels, has prompted worries over a wider conflict and a migrant crisis in Europe similar to 2015.

Migrant numbers have already surged along the rugged frontier after Turkey's President Recep Tayyip Erdogan, seeking to pressure the EU over Syria, said the country had "opened the doors" to Europe.

Greece said Sunday it has blocked nearly 10,000 migrants at its border with Turkey.

Under a 2018 deal with Russia meant to bring calm to Idlib, Turkey has 12 observation posts in Syria, but several have come under fire from Syrian President Bashar al-Assad's forces.

Turkey wants the international community to establish a no-fly zone over Idlib.

SANA Syrian state media reported that the government shot down a Turkish drone near the town of Saraqeb, publishing footage of an aircraft tumbling from the sky in flames. Those images could not be immediately confirmed.

But Turkish defence ministry confirmed one of its drones was shot down.

Earlier on Sunday, Istanbul police detained the editor-in-chief of the Turkish version of Russia's Sputnik website as its offices were being searched in Istanbul.

Three of its journalists were also taken to a courthouse in Ankara for questioning, likely related to a Sputnik article in English claiming that Turkey's Hatay province was "stolen" from Syria. Colonial power France ceded the southern region to Turkey in 1938.

The news website later said they had been released.

Turkish media said Erdogan and Russian President Vladimir Putin would meet in Moscow on March 5. They already spoke by telephone last week when both expressed "concern" over the escalation.

The Russian and Turkish foreign ministers also spoke by telephone on Sunday, Moscow's ministry said, to discuss preparations for the meeting between the two leaders, and the safety of the Sputnik journalists.

Kremlin spokesman Dmitri Peskov said he "hoped" the meeting would be on Thursday or Friday, which he admitted would be "difficult" but was "important" nonetheless.

Some 13,000 migrants have amassed at the Turkey-Greece border, including families with young children who spent the night in the cold, the International Organization for Migration said.

An estimated additional 2,000 migrants arrived at the Pazarkule border gate Sunday, including Afghans, Syrians and Iraqis, according to an AFP reporter.

But as the crowds rushed to enter Europe, Greek police and soldiers blocked 9,972 "illegal entrances" from entering the northeastern Evros region in the past 24 hours, a Greek government source said.

The situation on the Greek island of Lesbos grew tenser on Sunday as local people blocked around 50 migrants, including children, from landing their boat after several hours at sea, AFP photographers witnessed.

Some also insulted a UN official and attacked journalists and photographers, while later on Sunday, residents set fire to a disused migrant centre.

The UN refugee agency spokesman Babar Baloch called for "calm and easing of tensions on the border" as he urged countries to "refrain from the use of excessive force".

The developments recalled events in 2015 when more than a million migrants fled to Europe, mainly via Greece, in what became the continent's worst refugee crisis since World War II.

Erdogan said Turkey, home to some 3.6 million refugees, did not plan to close the borders because "the (EU) should keep its promises".

He was referring to the 2016 deal with Brussels to stop the flow of refugees in exchange for billions of euros.