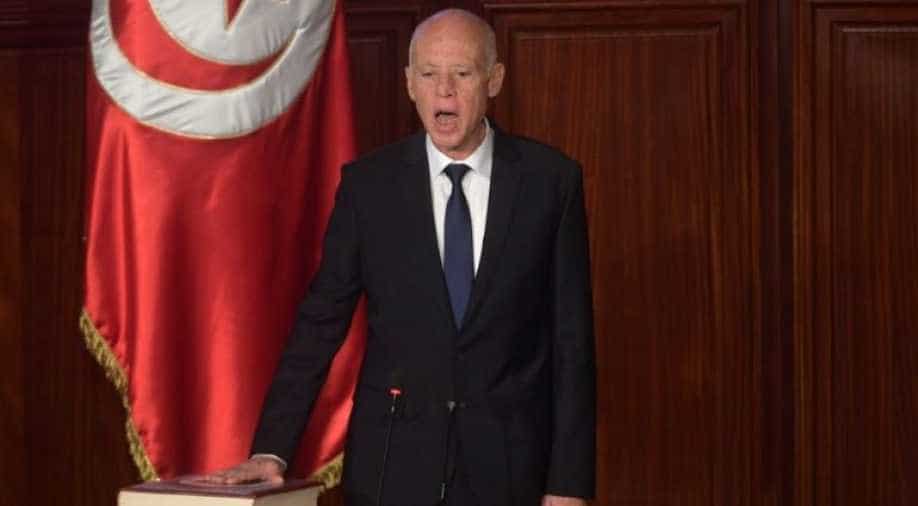 Saied dismissed the moves as "wretched and worthless", mockingly saying that if they wanted to meet they could do so "in a spaceship". Photograph:( AFP )

In a dramatic escalation of a political crisis that his opponents labelled a coup, Tunisia's president dismissed the government and froze parliament on Sunday. They have called their own supporters to come onto the streets in protest. President Kais Saied said he would assume executive authority with the assistance of a new prime minister. It is the biggest challenge yet to the democratic system Tunisia introduced in a 2011 revolution

Tunisia's president dismissed the government and froze parliament on Sunday in a dramatic escalation of a political crisis that his opponents labelled a coup, calling their own supporters to come onto the streets in protest.

President Kais Saied said he would assume executive authority with the assistance of a new prime minister, in the biggest challenge yet to the democratic system Tunisia introduced in a 2011 revolution.

Crowds of people quickly flooded the capital and other cities to support Saied, cheering and honking car horns in scenes that recalled the revolution, which triggered the Arab Spring protests that convulsed the Middle East.

As his supporters filled the central Habib Bourguiba Avenue, the epicentre of the 2011 revolution, Saied joined them in the street, state television pictures showed.

However, the extent of backing for Saied's moves against a fragile government and divided parliament was not clear, as Parliament Speaker Rached Ghannouchi called on Tunisians to come into the streets to stop what he called a coup.

Saied, in his televised statement announcing his move, had warned against any violent response.

"I warn any who think of resorting to weapons... and whoever shoots a bullet, the armed forces will respond with bullets," he said in a statement carried on television.

Hours after the statement, military vehicles surrounded the parliament building as people nearby cheered and sang the national anthem, two witnesses said. Local media reported that the army had also surrounded the state television building.

Years of paralysis, corruption, declining state services and growing unemployment had already soured many Tunisians on their political system before the COVID-19 pandemic hammered the economy last year and coronavirus infection rates shot up this summer.

Protests, called by social media activists but not backed by any of the big political parties, took place on Sunday with much of the anger focused on the moderate Islamist Ennahda party, the biggest in parliament.

Ennahda, banned before the revolution, has been the most consistently successful party since 2011 and a member of successive coalition governments.

Its leader the parliament speaker Ghannouchi, immediately labelled Saied's decision "a coup against the revolution and constitution" in a phone call to Reuters.

"We consider the institutions still standing, and the supporters of the Ennahda and the Tunisian people will defend the revolution," he added, raising the prospect of confrontations between supporters of Ennahda and Saied.

After calling for people to come onto the streets in protest in a video message later in the night, Ghannouchi said the parliament would meet in defiance of Saied`s move.

The leader of another party, Karama, and former President Moncef Marzouki both joined Ennahda in calling Saied's move a coup.

"I ask the Tunisian people to pay attention to the fact that they imagine this to be the beginning of the solution. It is the beginning of slipping into an even worse situation," Marzouki said in a video statement.