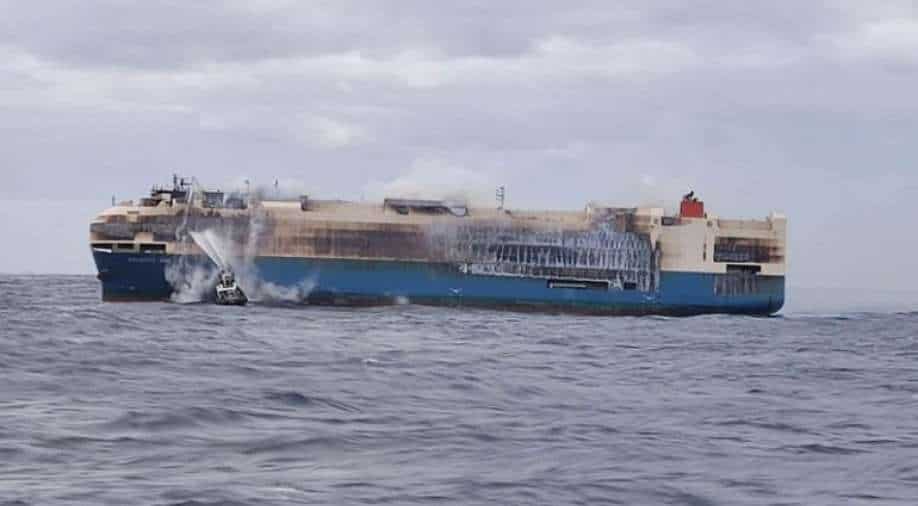 FILE PHOTO: The ship, Felicity Ace, which was traveling from Emden, Germany, where Volkswagen has a factory, to Davisville, in the U.S. state of Rhode Island, burns more than 100 km from the Azores islands, Portugal, February 18, 2022. Photograph:( Reuters )

The Felicity Ace, carrying around 4,000 vehicles including Porsches, Audis and Bentleys, some with lithium-ion batteries, caught fire on Wednesday last week

Heavy tug boats on Tuesday sprayed water on a burning ship carrying thousands of Porsches and Bentleys adrift off the coast of Portugal's Azores islands, the ship's manager said in a statement.

The Felicity Ace, carrying around 4,000 vehicles including Porsches, Audis and Bentleys, some with lithium-ion batteries, caught fire on Wednesday last week.

The 22 crew members on board were evacuated the same day.

Ship manager Mitsui O.S.K. Lines Ltd (MOL) said in a statement the vessel was still on fire but stable, and that no oil leak had been reported so far. It also said the ship was drifting further from the Azores islands in the Atlantic ocean.

Two large tug boats equipped with firefighting gear arrived from Gibraltar on Monday, and were working with another patrol boat to spray water at the Felicity Ace and cool it down, MOL said.

The arrival of two other tug boats with more firefighting equipment is scheduled for Feb. 23 and Feb. 26.

"Together with the all relevant parties, MOL is making every effort to contain the damage and resolve the situation as soon as possible," MOL said.

João Mendes Cabeças, the captain of the nearest port on the Azorean island of Faial, said on Sunday the fire had lost its intensity, probably because there was little left to burn.

Cabeças said as the fire subsides and the structure cools down, firefighting teams and technicians might be able to board the vessel to prepare to tow it either to Europe or the Bahamas.

"When conditions are safe the salvage team will board the Felicity Ace for an initial assessment," MOL added.

Cabeças told Reuters over the weekend the lithium-ion batteries in the electric vehicles were "keeping the fire alive." It was not clear whether the batteries had caused the fire.

MOL did not immediately respond to a Reuters request for comment on the cause of the fire.

Volkswagen, which owns the car brands, said on Monday it did not have any further information to share.