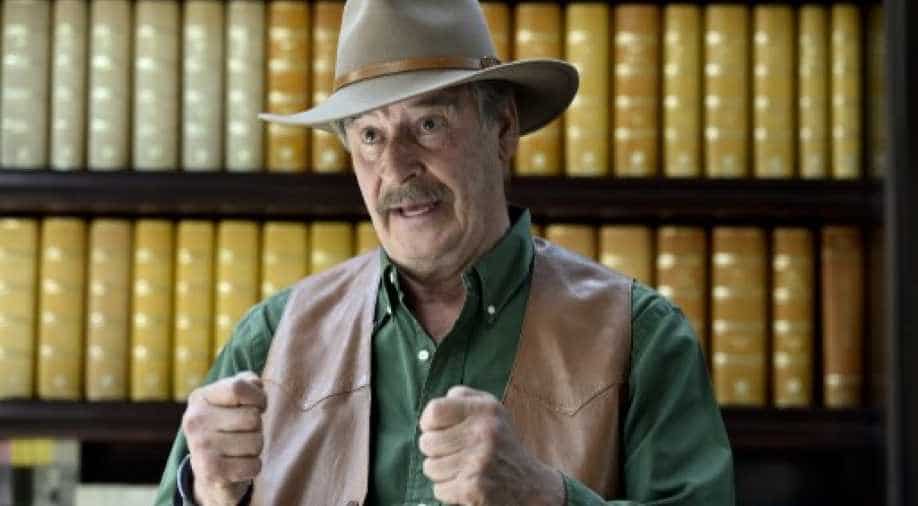 Former president Vicente Fox was even more strident in his message to Donald Trump, once again using an expletive to show his displeasure. Photograph:( AFP )

"The announcement of @realDonaldTrump's wall before the visit of @EPN (Pena Nieto) is an affront to Mexico," Margarita Zavala, a potential 2018 presidential candidate of the conservative National Action Party (PAN), wrote on Twitter.

"The visit must be reconsidered," Zavala said hours before Trump's announcement, adding in Spanish a hashtag that translates to "no to the wall".

Making good on a campaign promise, Trump ordered work to begin on designing and building the wall as Mexico's foreign and economy ministers were in Washington to prepare Pena Nieto's own visit on January 31. Their meetings continue on Thursday.

The US leader repeated his vow to make Mexico reimburse the cost of building the massive barrier across the 2,000-mile (3,200-kilometre) stretch.

Economy Minister Ildefonso Guajardo warned on Tuesday that Mexico could pull out of negotiations with the Trump administration if it insists on making his government pay for the wall, including by tapping remittances that migrants send home.

Pena Nieto's spokesman, Eduardo Sanchez, did not immediately respond to a request for comment.

The last time Pena Nieto met with Trump, things did not go well for the Mexican leader.

Pena Nieto came under massive criticism at home for hosting the Republican billionaire during the US presidential election in August even though Trump had called Mexican migrants "rapists" and drug runners.

Now, he is under pressure to avoid meeting Trump again, with Senator Miguel Barbosa, of the leftist Democratic Revolution Party (PRD), saying Pena Nieto should not negotiate "under pressure" or let Trump "impose his conditions".

Barbosa described the wall and measures against "sanctuary" US cities that protect migrants from deportation as "acts of aggression against Mexico, against Latin America, against the world, against freedom".

At the busy border crossing in the northwestern city of Tijuana, Julian Tamayo was sitting in a long line of cars with his wife and daughter to go to the US city of San Diego, where he works.

"Many of the (border) guards are very despotic and arrogant, and Trump is giving them carte blanche to be even more so," Tamayo, 49, told AFP.

Hector Renteria, a 29-year-old architecture student who was also waiting to cross the border, said the wall is not useful because migrants will "find other ways to cross" illegally. Renteria worried that the wall will "affect traffic more and (border) checks will be stricter".

Other political stalwarts urged Pena Nieto to stand up to Trump during his visit.

Two-time presidential election runner-up Andres Manuel Lopez Obrador exhorted Pena Nieto to lodge a complaint against the US government at the United Nations for "violation of human rights and racial discrimination".

He said Pena Nieto should go to Washington to deliver the complaint to Trump and to "fight for freedom, not beg for it".

Pena Nieto vowed on Monday that there would be "neither confrontation nor submission" in the negotiations with the Trump administration, which will include trade, immigration and other issues.

Former president Vicente Fox, meanwhile, used an expletive yet again on Twitter to tell the White House's spokesman that Mexico will not pay for the wall.

"Sean Spicer, I've said this to realDonaldTrump and now I'll tell you: Mexico is not going to pay for that fucking wall," Fox thundered.