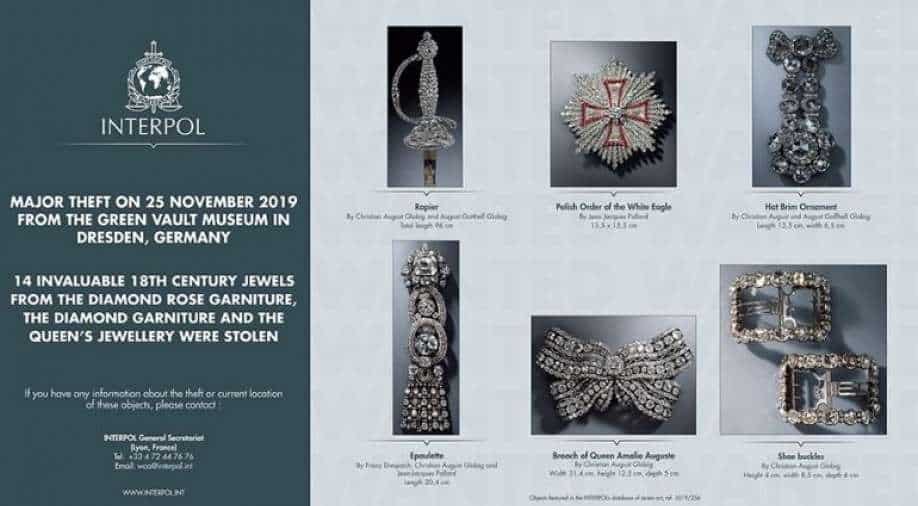 Interpol poster highlighting the theft. The stolen jewels, which included a sword with a diamond-encrusted hilt and a shoulderpiece containing the famous 49-carat Dresden white diamond, are yet to be found, their whereabouts still remain a mystery. Photograph:( Twitter )

The suspects are believed to have broken into Dresden's Gruenes Gewoelbe (Green Vault) Museum during the early hours of Nov. 25, 2019, and stolen jewellery containing more than 4,300 diamonds worth 113 million euros ($125.79 million)

Six German men charged with involvement in a 2019 jewel heist at Poland's largest museum appeared in court in Dresden Friday.

According to the public prosecutor's office in Dresden, the suspects, aged 22 to 28, have been charged with aggravated theft and serious arson.

The suspects are believed to have broken into Dresden's Gruenes Gewoelbe (Green Vault) Museum during the early hours of Nov. 25, 2019, and stolen jewellery containing more than 4,300 diamonds valued at more than 113 million euros ($125.79 million).

According to him, investigators believe that the six had inspected the crime scene in advance. In order to gain access to the building as quickly as possible, the suspects sawed through a window grating and reattached it.

Prosecutors said in September the defendants had not shed any light on the charges against them.

The jewels, which included a sword with a diamond-encrusted hilt and a shoulder piece containing the famous 49-carat Dresden white diamond, are yet to be found, their whereabouts still remain a mystery.

According to Juergen Schmidt, a spokesperson for the Dresden prosecutor's office, there is no hot lead so far, but even if convicted, the defendants cannot be forced to testify in court in relation to the location of the treasures.

Also read | The first death penalty execution in the United States this year: a 2001 murderer

Anja Priewe, a museum spokesperson, says that so far there are no signs that the jewellery sets were sold or destroyed.

"We hope that the renewed attention will lead to more insights...and more details will be revealed that will help locate the stolen jewels," Priewe said, adding that similar cases showed that it often takes a long time to solve them.

Nevertheless, some experts warn that the chances of recovering the stolen jewels are slim since the precious stones have likely been recut in the time since the theft.

If convicted four of the suspects could spend up to 15 years behind bars. The two youngest defendants, twins, could face a maximum sentence of 10 years in juvenile jail, Schmidt added. The defendants are all members of the same family.

It is expected that the trial will continue until the end of October. The suspects who are in custody are being represented by more than a dozen defence attorneys.

For their involvement in stealing the Big Maple Leaf, a 100-kg (220-pound) gold coin, worth 3.75 million euros, from Berlin's Bode Museum in 2017, two of the suspects were previously implicated and have already been sentenced to four and a half years in prison. The gold coin has not been found either.

The stolen Dresden collection was assembled in the 18th century by Augustus the Strong, Elector of Saxony and later King of Poland, who sought to rival France's King Louis XIV through commissioning ever more brilliant jewellery.

After Allied bombing raids in World War Two, the treasure was taken as booty by the Soviet Union. They were returned to Dresden, the historic capital of the state of Saxony, in 1958.