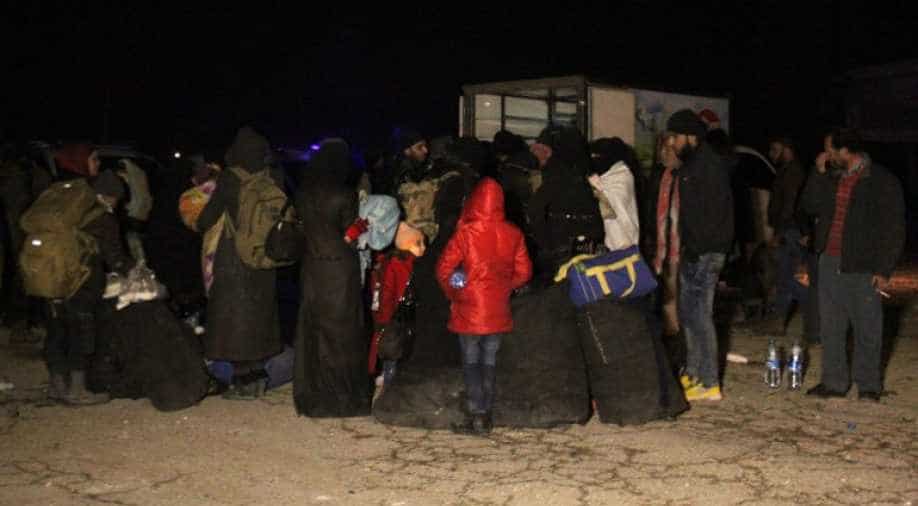 Thousands of civilians and rebels left Aleppo on Thursday under an evacuation deal that will allow Syria's regime to take full control of the city after years of fighting.

The International Committee of the Red Cross said the operation could take days as US secretary of state John Kerry warned action was needed to prevent a Srebrenica-style massacre with tens of thousands of civilians still trapped in the city.

"Some 3,000 civilians and more than 40 wounded, including children, were brought out," the head of the International Committee for the Red Cross in Syria, Marianne Gasser, said after the first two convoys left.

"No one knows how many people are left in the east, and the evacuation could take days," she added.

The withdrawal began a month to the day after Syrian government forces launched a major offensive to retake all of Aleppo, and will hand the regime its biggest victory in more than five years of civil war.

In a video message to Syrians, President Bashar al-Assad said the "liberation" of Aleppo was "history in the making".

US chief diplomat Kerry said what had already happened in the city was "unconscionable" but warned over the fate of "tens of thousands of lives that are now concentrated into a very small area of Aleppo".

"And the last thing anybody wants to see... is that that small area turns into another Srebrenica," he said, referring to a 1995 Bosnian war massacre.

The evacuations were announced on Thursday, after an initial plan for civilians and fighters to leave rebel-held parts of the city collapsed the previous day amid renewed clashes.

They began with a convoy of ambulances and buses crossing into a government-held district in southern Aleppo around 2:30 pm (1230 GMT).

A Syrian military source told AFP that the first convoy carried mostly civilians as well as around 200 rebel fighters.

The vehicles arrived just over an hour later in opposition territory about five kilometres (three miles) west of the city, and they were followed by two more convoys.

An AFP correspondent in the city's southern Al-Amiriyah district saw people piling on to green buses, filling seats and even sitting on the floor, with some worried there would not get another chance to leave.

Many were in tears and some hesitated to board, afraid they would end up in the hands of regime forces.

On the dusty window of one of the buses someone had written "One day we will return".

A first evacuation attempt on Wednesday fell apart, with artillery exchanges and resumed air strikes rocking the city until the early hours of Thursday.

The defence ministry in Moscow said Syrian authorities had guaranteed the safety of the rebels leaving the city.

The head of the UN-backed humanitarian task force for Syria, Jan Egeland, said in Geneva that most of those evacuated from Aleppo would head to opposition stronghold Idlib, in Syria's north-west.

De Mistura, however, warned that "Idlib will become the next Aleppo" if a ceasefire and political agreement for Syria is not found.

The UN Security Council will meet Friday around 1700 GMT to discuss the crisis in Aleppo in response to a request by France, which is calling for international observers to be sent to monitor the situation and ensure aid deliveries.

Russia meanwhile accused the rebels of having violated the ceasefire as violence erupted before Wednesday's planned evacuation while Turkey accused Assad's regime and its allies of blocking people from leaving.

Iran, another key Assad backer, was reported to have imposed new conditions on the agreement, including the evacuation of some civilians from two Shiite-majority villages in northwestern Syria under rebel siege.

A Syrian source on the ground told AFP that "1,200 injured and sick people and their families will be evacuated".

Backed by foreign militia forces including fighters from Lebanon's Shiite Hezbollah movement, the advance launched last month made rapid gains, leaving the rebels cornered in a tiny pocket of the territory they had controlled since 2012.

More than 465 civilians died in east Aleppo during the assault and another 149 were killed by rebel rocket fire on government-held areas, according to the Syrian Observatory for Human Rights monitoring group.

More than 310,000 people have been killed since the Syrian conflict began in 2011 with anti-government protests, and over half the population has been displaced, with millions becoming refugees.

Diplomatic efforts -- including several rounds of peace talks in Geneva -- failed to make headway in resolving the conflict which saw a turning point last year when Russia launched an air war in support of Assad.

With Aleppo out of rebel hands, the largest remaining rebel bastion is Idlib province, which is controlled by an alliance dominated by former Al-Qaeda affiliate Fateh al-Sham Front.

Turkish President Recep Tayyip Erdogan said he discussed the situation in Aleppo Thursday with US and Russian counterparts, Barack Obama and Vladimir Putin.

After upping its involvement by brokering the Aleppo deal, Turkey said it would meet with Russia and Iran in Moscow on December 27 to discuss a political solution to the entire conflict.