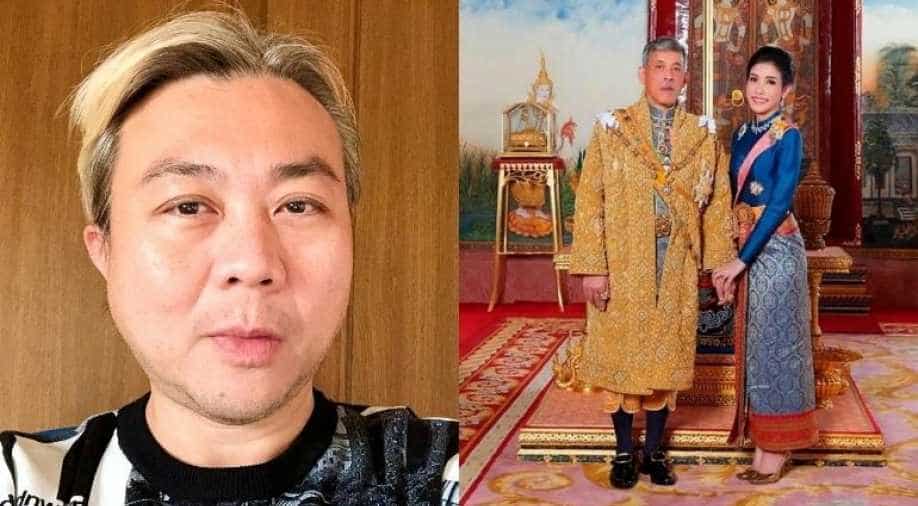 Pavin Chachavalpongpun, a self-exiled academic and critic of the Thai monarchy Photograph:( Reuters )

At demonstrations in Bangkok, the images used to display the muse behind the protest are of two exiles who have openly criticised the monarchy.

Formers critics of Thailand are inspiring youngsters to protest and take on King Maha Vajiralongkorn.

At demonstrations in Bangkok, the images used to display the muse behind the protest are of two exiles who have openly criticised the monarchy.

King Maha Vajiralongkorn holds a place of “revered worship” in the Thai constitution and his images are omnipresent on city streets, schools and businesses.

Former diplomat Pavin Chachavalpongpun and historian Somsak Jeamteerasakul have not been involved in organizing a recent series of demonstrations and show no sign of working together, but some protesters said their writing and social media posts have helped to loosen the taboo on questioning the monarchy, which is punishable by up to 15 years in prison under Thailand’s lese majeste law.

"The fact that the public discusses the monarchy institution more is because of them," said Panusaya Sithijirawattankul, a 21-year old student at Thammasat University in Bangkok.

"Previously, we were unable to say any of this and if we did, we would risk becoming another exile," said Panusaya, who read out a 10-point demand for palace reform at the August 10 protest. It was based on a reform proposal by Somsak, which he wrote a decade ago and revised and published on Facebook last year, where Panusaya first saw it.

Somsak’s proposal called for the abolition of the lese majeste law and the end of what he called “one-sided public relations campaigns promoting the monarchy,” among other things.

“The monarchy is loved and revered by Thais. Insults to the monarchy can upset another group of people. Expressions should take other people’s feelings into consideration too,” she said.

“Criticising the monarchy is a legitimate act,” Pavin said. Somsak did not respond to requests for comment.

Since July 18, a growing number of mostly young protesters have gathered on Bangkok’s streets and university campuses calling for changes to a political system they say assures prime minister Prayuth Chan-ocha a hold on power. The protests have focused on Prayuth, but some protesters have also called for reform of the monarchy. More than 10,000 people attended the biggest of the rallies on August 16. Another big gathering is planned for September 19.

Prayuth, who led a military coup in 2014, says elections held last year were fair. His security forces have arrested more than a dozen leaders of the demonstrations for breaching internal security laws and defying an emergency decree banning public gatherings to prevent the spread of the coronavirus. All protesters have been released on bail.

Pavin and Somsak, who now live in Japan and in France, respectively, have been singled out for attack by Prayuth.

"Where are they now and how are they taking responsibility for the damage afflicted on our country?" Prayuth said on August 25, referring to the two men specifically, when asked about royal criticism on social media.

The Royal Palace in Bangkok declined to comment on the recent protests and on overseas critics of the monarchy. In addition to Pavin and Somsak, at least 102 other Thais have gone into exile since the 2014 coup, mostly for fear of prosecution for lese majeste, according to campaign group Thai Lawyers for Human Rights.

In April 2017, Prayuth's military government said anyone sharing  what it described as “false information” from the two men, as well as UK-based author and former Reuters journalist Andrew MacGregor Marshall, could face prison under the Computer Crime Act. Later that month, police arrested and detained four people after they shared a Facebook post by Somsak but did not proceed with charges, according to legal group iLaw, which keeps track of the Thai government’s moves to restrict freedom of expression. Thai police did not respond to questions from Reuters.

Royalist Marketplace, a private Facebook group set up by Pavin in April, had more than 1 million followers before the Thai government demanded that Facebook make the page unavailable within Thailand. Facebook, which complied on August 24, said it was “compelled” by the government to make Pavin’s group inaccessible. Within a week Pavin’s replacement group on Facebook, with an almost identical name, had attracted more than 1 million followers.

The Royalist Marketplace group and its successor provide a platform for Thais to discuss the country’s traditional culture that promotes the monarch as a semi-divine leader of the nation who must never be questioned, even though it leaves them open to prosecution under the lese majeste law if they criticize the monarchy.

“The movement's real catalyst is Royalist Marketplace,” said Titipol Phakdeewanich, a political scientist at Ubon Ratchathani University. “This is the main reason why the government wanted to shut it down."

Pavin and Somsak are reviled by Thai traditionalists who believe the monarchy must never be questioned.

"They are exiles because they have committed illegal actions and have illegal thoughts," said Warong Dechgitvigrom, a politician who launched the Thai Pakdee (Loyal Thais) group in response to the student protests. "They're dangerous because they incite hatred and bully and smear the monarchy."

Pavin, who has not been charged with lese majeste, rejected Warong’s accusation.

Somsak was charged with lese majeste in 2011 over two articles he posted on Facebook about Vajiralongkorn’s sister. He denies wrongdoing in the case, which remains open, saying the lese majeste law only applies to the king, queen and heir to the throne.

Pavin, 49, is a former Thai diplomat who quit the foreign service in 2010. He told said he left because during a posting in Singapore, he was upset at having to defend the military coup in 2006 that removed populist Prime Minister Thaksin Shinawatra from power. Thai authorities declined to comment on why Pavin left the foreign service.

He worked as an academic in Singapore before moving to Japan in 2012 and is now an associate professor at the Center for Southeast Asian Studies at Kyoto University in Japan.

“I'm only glad that whatever I've been fighting for so long, that those people (protesters) begin to appreciate whatever I paved the way for them,” Pavin told Reuters. He said he is not involved in organising any protests but once addressed a demonstration for a few minutes via video link at the request of students.

Almost half a million Thais read his analytical Facebook posts on the monarchy and thousands watch his TikTok videos in which he lip-syncs to songs and acts out soap opera dialogues to mock the royal family.

Somsak, 62, cuts a more solemn figure. Still, his face and shock of white hair are a popular image on people’s T-shirts at demonstrations.

Many protesters say he is respected for his historical knowledge of Thai monarchs and his knowledge of the inner-workings of the royal family and its spending.

In 1976, he was one of the 2,000 pro-democracy students at Thammasat University that were attacked by state forces and royalist supporters which accused them of being anti-monarchist, communist sympathisers. Dozens of protesters were killed. He fled to France after the Prayuth-led coup in 2014.

Marshall, 49, was a Reuters journalist for 16 years until 2011, mostly in Asia including two years in Bangkok. He has written two books on Thailand, the latest called "A Kingdom in Crisis," which is banned in Thailand. He moved back to his native Scotland in 2016 and is now a journalism lecturer at Edinburgh Napier University. He has not been charged with lese majeste.

“One of the most striking developments of the past few years is the collapse of royalist mythology,” Marshall said, adding that many Thais, especially younger people who spend time online, no longer believe what he described as “palace propaganda.”

Government spokeswoman Ratchada said the government respects young Thais’ freedom of expression but said they should not cross the line into illegality by criticizing the monarchy.

“Now they put me on a gold frame and raise it, just like what true royalists would do the royal family,” Pavin said. “It's parody. It's a part of the political tactic.”