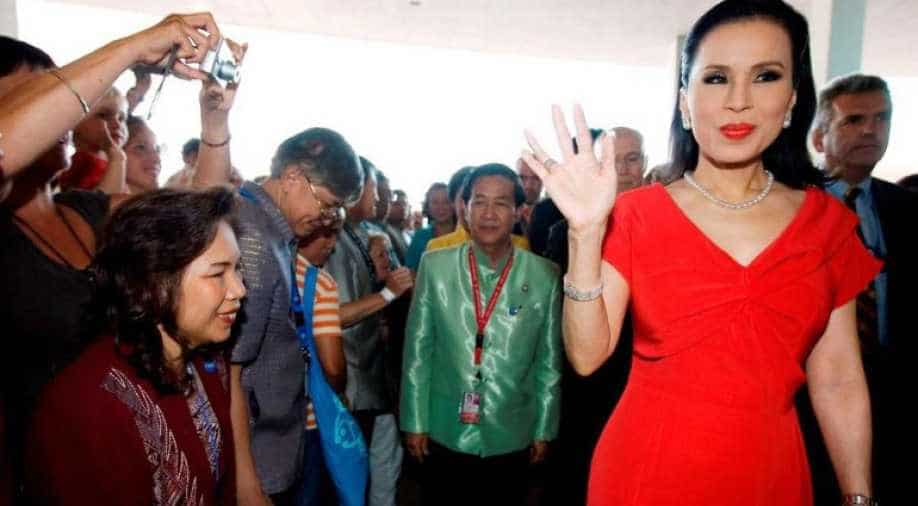 Princess Ubolratana Mahidol of Thailand waves to people during her visit to the Expo Zaragoza 2008, in Zaragoza, Aragon, Spain. Photograph:( Agencia EFE )

Thailand has been mired in political drama since Friday when Princess Ubolratana's name was submitted as a prime ministerial candidate by the Thai Raksa Chart Party.

Thailand's Election Commission said Wednesday it will ask the constitutional court to dissolve the party that put forward a princess name as prime ministerial candidate.

The move has come days after the king rebuked the move in a stern royal command. "The action is considered hostile to the constitutional monarchy," the king said.

Meanwhile, the Thai Princess Ubolratana's name had apologised after her short-lived candidacy for prime minister.

The apologies followed after her brother's (the king) rebuke sent jitters across the politically febrile country just weeks before elections.

Thailand has been mired in political drama since Friday when Princess Ubolratana's name was submitted as a prime ministerial candidate by the Thai Raksa Chart Party.

The party is allied with the powerful Shinawatra clan, which has won all elections since 2001 but whose patron, the billionaire ex-premier Thaksin, lives in self-exile to avoid jail.

Ubolratana's unprecedented bid to enter frontline politics unravelled within hours after King Maha Vajiralongkorn decried the entry of a royal into the political fray as "highly inappropriate".

Thailand's monarchy is seen as above politics, although royals have intervened in public during times of political crisis.

The princess was disqualified as a prime ministerial candidate by the Election Commission on Monday, which cited the royal command. It is now discussing whether to refer Thai Raksa Chart to the consitutional court for dissolution.

"I'm sorry that my genuine intention to help work for the country and fellow Thai people has created a problem that shouldn't happen in this era," she wrote.

It was tagged with a hashtag: "#howcomeitsthewayitis".

Ubolratana is the first-born of former king Bhumibol Adulyadej, but she gave up her royal titles when she married an American in 1972.

After her divorce, she moved back to Thailand where she is regarded by the Thai public as a part of the royal family.

While she said she was exercising her rights as a commoner to stand for premier, the palace statement said she is "still a member of the House of Chakri", referring to the name of the dynasty.

The monarchy in Thailand is considered sacred and revered by its people, and is under the protection of draconian lese majeste laws. The king's word is considered final.

The scuttling of her candidacy and potential moves to dissolve the Thai Raksa Chart party is a blow to Thaksin Shinawatra's political machine.

The party was set to add to the vote bank of the bigger Shinawatra electoral vehicle, Pheu Thai, in an election where secondary parties are targeting seats via the party list system.

Thaksin and his sister Yingluck -- who was overthrown in the 2014 coup -- live abroad to avoid convictions they say are politically motivated.

Party executives from Thai Raksa Chart have expressed contrition after the upheaval, but said they would challenge any attempt to disband the party. A media organisation affiliated with the Shinawatras was also in the crosshairs this week.

Voice TV, owned by Thaksin's son Ponthongtae, was ordered Tuesday by the National Broadcasting and Telecommunications Commission (NBTC) to go off-air for 15 days after two of its programs caused "confusion and provocation".