The Republican president's $4.7 trillion budget is expected to be rejected by Congress, where Democratic leaders on Sunday warned Trump against what they called a 'repeat performance' of last year's funding war, which led to a five-week partial shutdown of the federal government.

President Donald Trump on Monday told Congress to slash funding for foreign aid and the State Department and increase spending for the military and the wall he wants to build on the US-Mexico border in his 2020 budget, the opening move in his next funding fight with Congress.

The Republican president's $4.7 trillion budget is expected to be rejected by Congress, where Democratic leaders on Sunday warned Trump against what they called a "repeat performance" of last year's funding war, which led to a five-week partial shutdown of the federal government.

This year, the stakes are higher. The October 1 deadline for a funding deal to keep the government running coincides with the deadline to lift the debt limit. Without an increase in the limit, the US government would risk a default, which would shock the world economy.

Trump's budget asked for $8.6 billion to build a wall on the southern border with Mexico, more than six times what Congress gave him for border projects in each of the past two fiscal years, and 6 percent more than he has corralled by invoking emergency powers this year after he failed to get the money he wanted.

Trump called for defence spending to rise by 4 per cent to $750 billion, using the emergency Overseas Contingency Operations (OCO) account - derided by conservatives as a slush fund - to skirt spending caps set out in a 2011 fiscal restraint law.

Non-defence spending was held below those caps, thanks to steep proposed funding cut to the State Department (23 per cent) and Environmental Protection Agency (31 per cent), among others. The White House also proposed reforms to mandatory spending programs such as food stamps to cut $22 billion.

Even with the cuts, which the White House said would add up to $2.7 trillion in savings over a decade, the budget office said budget would not balance until 2034, exceeding the traditional 10-year outlook.

Tax cuts have been a priority for the Republican White House and Congress in recent years, rather than deficit reduction. The deficit ran to $900 billion in 2019, and the national debt has ballooned to $22 trillion.

'NO KNEELING': Trump criticises anti-racism protests during US anthem 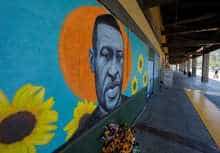