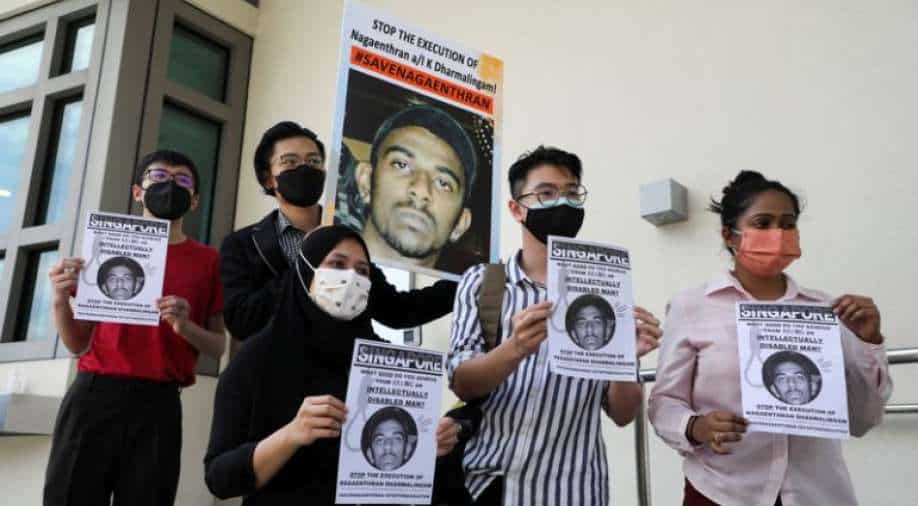 Activists hold posters against the execution of Nagaenthran Dharmalingam as activists submit a clemency petition at the Singapore High Commission in Kuala Lumpur, Malaysia. Photograph:( Reuters )

A Singapore court rejected on Tuesday an appeal against the execution of a Malaysian convicted of drugs smuggling, dismissing an argument put forward by his legal team that he should be spared because he was mentally impaired.

Nagaenthran Dharmalingam has been on death row for more than a decade for trafficking about 42.7 grammes (1.5 oz) of heroin into Singapore, which has some of the world's toughest narcotics laws.

Dharmalingam's lawyer Violet Netto had objected to presenting her client's prison medical records at the last hearing, citing confidentiality, and instead requested an independent psychiatric review.

But at Tuesday's hearing Chief Justice Sundaresh Menon said the bid to prevent the disclosure of medical reports was unreasonable and there was no admissible evidence showing any decline in his mental condition.

The court also dismissed the request for an independent psychiatric review.

"The appellant has been afforded due process under law, and it is not open to him to challenge the outcome of that process when he has put nothing forward to suggest that he does have a case to be considered," the five-judge panel said in its ruling.

Dharmalingam, who was wearing a purple prison uniform, did not appear to show any reaction to the ruling.

M Ravi, Dharmalingam's former lawyer who has continued to assist in the case, told reporters that the Malaysian had exhausted legal options to escape the death penalty.

Anti-death penalty group Reprieve said it believed Nagaenthran  is intellectually disabled and should be protected from the death penalty.

In a statement, Reprieve director Maya Foa called on Singapore President Halimah Yacob "to listen to the cries for mercy within Singapore and around the world."

It was not immediately clear when the execution would be carried out.

From 2016 to 2019, Singapore hanged 25 people - the majority for drug-related offences, according to official data.