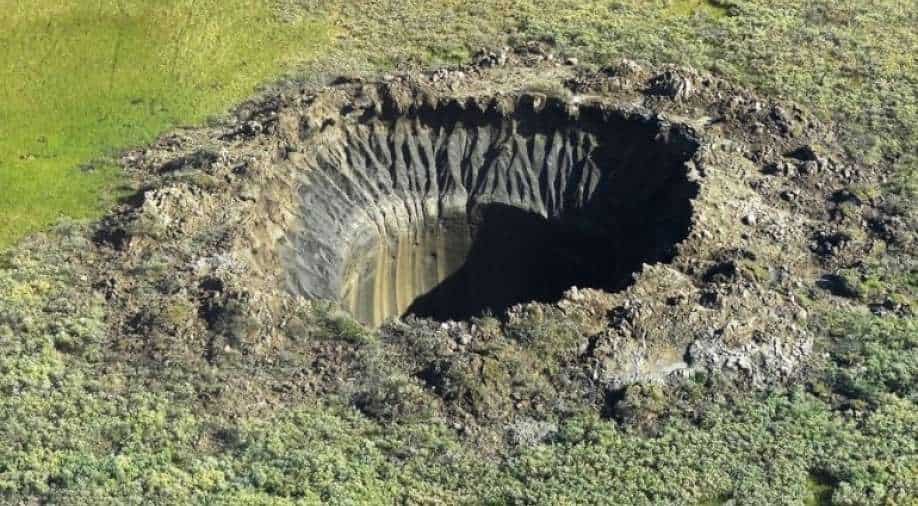 A giant crater on the Yamal peninsula in Siberia Photograph:( Twitter )

Russian scientists have unlocked the mysteries of the formation of massive holes in the north of Western Siberia, in the central part of the Yamal Peninsula.

The giant crater named C17 in the geoinformation system “The Arctic and the World Ocean” was created by the Oil and Gas Research Institute of the Russian Academy of Sciences (OGRI RAS). It was formed in the period 15 May–9 June 2020.

It is characterised by minimal water flooding and the uniquely good preservation of a significant part of the arch and a cavity of the complex shape formed in the ground ice.

For the first time, as a result of aerial photography from inside the crater with a UAV, a 3D model of the crater and a giant cavity in the ground ice, formed during its thawing from below, was built. The crater's diameter was about 25 m.

Study author Igor Bogoyavlensky, of the Oil and Gas Research Institute of the Russian Academy of Sciences, said "Three times we got close to losing it, but succeeded in getting the data for the 3D model."

The accumulation of gas, the pressure rise and the development of gas-dynamic processes in the cavity led to the growth of the PHM, and the explosion and formation of the crater.

The formation of the crater C17 was preceded by a long-term growth of the perennial heaving mound (PHM) on the surface of the third marine terrace.

According to Evgeny Chuvilin, the lead research scientist at the Skolkovo Institute of Science and Technology's Center for Hydrocarbon Recovery in Moscow, "The new crater is uniquely well preserved, as surface water hadn't yet accumulated in the crater when we surveyed it, which allowed us to study a 'fresh' crater, untouched by degradation."

Rapid climate warming at northern high latitudes is driving geomorphic changes across the permafrost zone. In the Yamal and Gydan peninsulas in western Siberia, subterranean accumulation of methane beneath or within ice-rich permafrost can create mounds at the land surface. Once over-pressurized by methane, these mounds can explode and eject frozen ground, forming a gas emission crater (GEC).

"The craters and other abrupt changes occurring across the Arctic landscape are indicative of a rapidly warming and thawing the Arctic, which can have severe consequences for Arctic residents and globally," said Sue Natali, Arctic program director at the Woodwell Climate Research Center and coauthor of the study.