Russian invasion of Ukraine: What you need to know right now 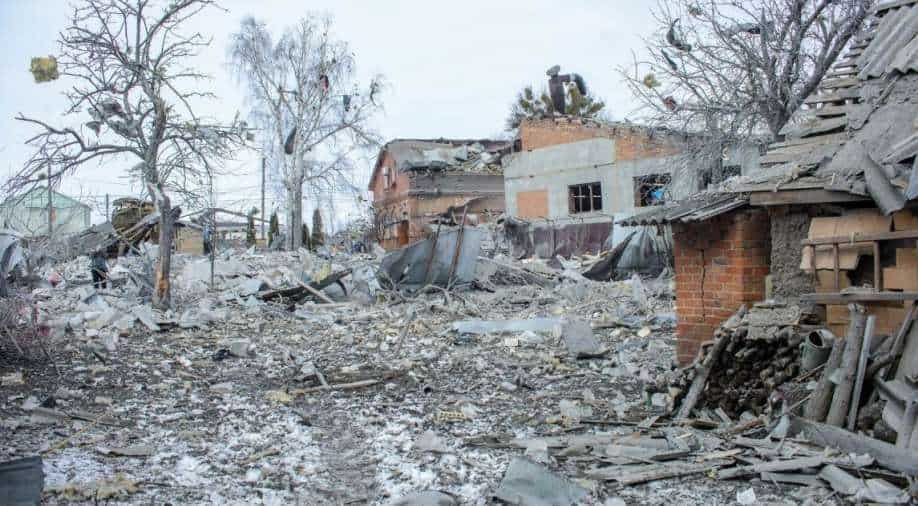 Debris is seen next to houses destroyed by shelling, amid Russia's invasion of Ukraine, in Sumy, Ukraine March 8, 2022 in this picture obtained from social media. Photograph:( Reuters )

Moscow describes its actions in Ukraine as a "special operation" to disarm its neighbour and unseat leaders it calls neo-Nazis. Ukraine and its Western allies call this a baseless pretext for an invasion to conquer a country of 44 million people.

President Joe Biden banned Russian oil and other energy imports to the United States, piling pressure on Vladimir Putin to halt the assault on Ukraine, but an effort to evacuate civilians from the besieged port city of Mariupol failed.

Ukraine's government accused Russia of shelling a humanitarian corridor it had promised in Mariupol.

* Biden acknowledged the ban on Russian energy imports, which has bipartisan support, would drive up U.S. energy prices.

* Britain said it aimed to phase out imports of Russian oil by the end of 2022. The EU plans to cut dependency on Russian gas this year by two-thirds.

* Russian forces have repeatedly tried to seize the southern regional capital of Mykolayiv in attacks that have been repulsed by Ukrainian troops, a Ukrainian presidential adviser said

* The United Nations human rights office said it had verified 1,335 civilian casualties so far in Ukraine, including 474 killed and 861 injured, but the true toll was likely to be higher.

* Ukraine says its forces have killed more than 11,000 Russian troops. Russia has confirmed about 500 losses. Neither side has disclosed Ukrainian casualties.

The United States rejected a surprise offer by NATO ally Poland on Tuesday to transfer its Russian-made MiG-29 fighter jets to a U.S. base in Germany as a way to replenish Ukraine`s air force in its defence against invading Russian forces.

The United States has sought to speed weapons deliveries to Ukraine. But the prospect of flying combat aircraft from NATO territory into the war zone "raises serious concerns for the entire NATO alliance," the Pentagon said.

* McDonald`s Corp, Starbucks and L`Oreal are temporarily closing all outlets in Russia. Coca-Cola and Pepsi suspended soda sales in the country.

* Unilever became the first major European food company to stop imports and exports out of Russia.

* The London Metal Exchange halted trade in nickel after prices of the metal, a key component in electric vehicle batteries, doubled to more than $100,000 a tonne.

Ukrainian President Volodymyr Zelenskiy told Britain`s House of Commons via videolink: "The question for us now is to be or not to be. I can give you a definitive answer: it`s definitely to be."

"Russia may continue to grind out its advance at a horrible price, but this much is already clear: Ukraine will never be a victory for Putin," Biden told reporters. "Putin may be able to take a city, but he`ll never be able to hold the country."