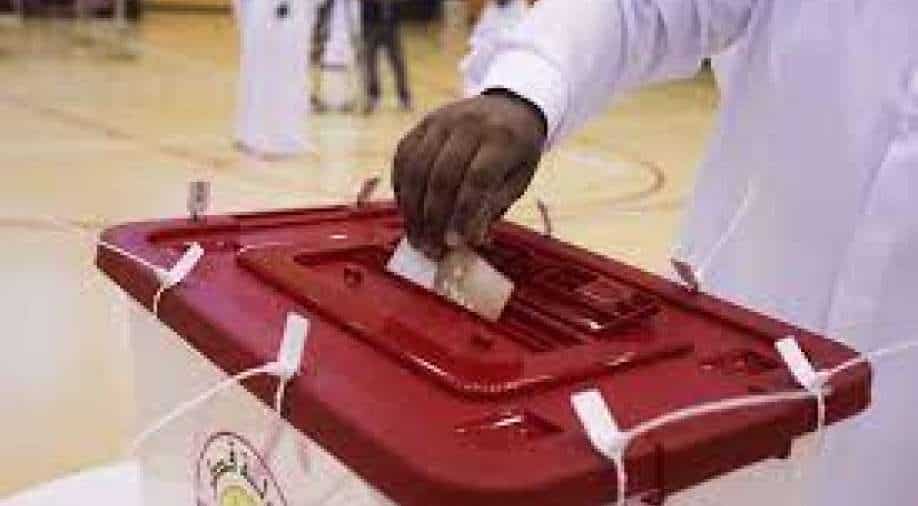 Qataris began voting in their country's first ever legislative polls Saturday, AFP correspondents saw, with 30 of 45 seats in a previously appointed, largely advisory council up for election

Qataris began voting in the emirate's first legislative election Saturday in a symbolic nod to democracy that analysts say will not lead to power shifting away from the ruling family.

The vote is for 30 members of the 45-strong Shura Council, a body with limited powers that was previously appointed by the emir as an advisory chamber.

Polls opened at 0500 GMT and will close at 1500 GMT with the results expected the same day.

At a polling station in the Jawaan bin Jassim school in the Onaiza district of the capital Doha, Qatari citizens wearing white thobes signed in to vote at a registration desk.

After queueing briefly, they cast their ballots into a semi-transparent plastic box emblazoned with the dhow boat, crossed swords and palm tree emblem of Qatar.

Observers say the decision to hold the election, required under the 2004 constitution but repeatedly delayed in the "national interest", comes amid heightened scrutiny as Qatar prepares to host the 2022 World Cup.

"It's a way to show that they are moving in the right direction, that they want to achieve more political participation" before the World Cup, said Luciano Zaccara, an assistant professor in Gulf politics at Qatar University.

The Shura will be allowed to propose legislation, approve the budget and recall ministers. But the emir, all-powerful in the world's largest exporter of liquefied natural gas, will wield a veto.

"This is a historic day to participate, choose and vote in the first elected Shura Council, and I feel very happy... I hope that the next council will keep pace with the developments that Qatar and the world are experiencing," voter Ali Abdullah al-Khulaifi, 44, told AFP.

The streets of Qatar's towns have been speckled with billboards adorned with beaming candidates sporting national dress.

Beyond single-candidate town hall meetings, posters and TV spots, the country's introduction to democracy has been limited, with no change of government possible and political parties outlawed.

Candidates have uniformly avoided debate about Qatar's foreign policy or status as a monarchy, instead focussing on social issues including healthcare, education and citizenship rights.

All candidates had to be approved by the powerful interior ministry against a host of criteria, including age, character and criminal history.

Candidates have also been required to register official campaign events with the ministry in advance, as well as the names of all speakers as authorities seek to clamp down on possible sectarianism or tribalism.

The candidates are mostly men, with just 28 women among the 284 hopefuls running for the 30 available council seats. The remaining 15 seats will be appointed by the emir.

One woman casting her ballot Saturday, Sabeeka Yousef, said she was not concerned about this imbalance.

"The most important thing for me in this process is to choose a candidate who is able to deliver our voice," she said.

Most of Qatar's 2.5 million residents are foreigners, ineligible to vote.

Candidates have to stand in electoral divisions linked to where their family or tribe was based in the 1930s, using data compiled by the then-British authorities.

Diplomatic sources suggest families and tribes have already conducted internal ballots to determine who will be elected for their constituencies.

"When you don't have political parties... people sometimes will tend to vote for people they know, or for members of family or members of tribe," said Courtney Freer, a fellow at Emory College.

Qataris number about 333,000, but only descendants of those who were citizens in 1930 are eligible to vote and stand, disqualifying members of families naturalised since then.

Some members of the sizeable Al-Murrah tribe are among those excluded from the electoral process, sparking a fierce debate online.