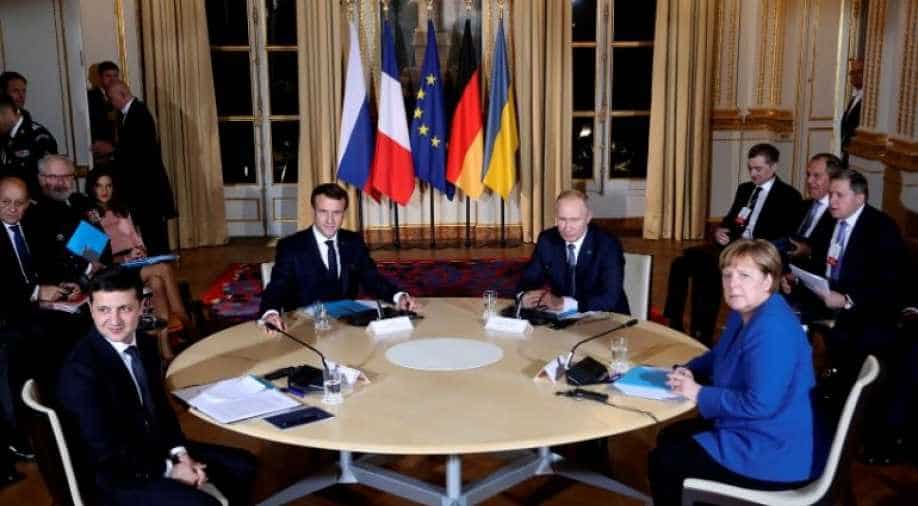 Russian leader Vladimir Putin on Monday met Ukranian counterpart Volodymyr Zelensky for the first time ever at a Paris summit aimed at agreeing to measures to help end five years of conflict in the east of Ukraine.

No comprehensive peace deal is expected from the meeting, mediated by French President Emmanuel Macron and German Chancellor Angela Merkel, but diplomats hope the summit will help to bolster trust between the two men.

The four-way talks at the Elysee Palace are expected to be followed by a hotly-awaited bilateral between wily ex-KGB agent Putin, in power for two decades, and ex-comedian Zelensky who won the presidency this year.

Thousands have been killed and one million have fled their homes since pro-Russia militias in eastern Ukraine launched a bid for independence in 2014, kicking off a conflict that deepened Russia's estrangement from the West.

Separatists seized control of the Donetsk and Lugansk regions shortly after Russia's annexation of the Ukrainian peninsula of Crimea.

The issue of Crimea, whose seizure gave Putin a popularity boost at home but led to international sanctions being imposed against Moscow, is not on the table at this summit.

The meeting's aims include agreeing to disband illegal militias, the departure of foreign fighters from Donetsk and Lugansk, and Ukraine taking back control of its border with Russia, according to a French presidential source.

Also key is agreeing to a calendar for local municipal elections to be held in Donetsk and Lugansk under Ukrainian law, with the two regions enjoying special status, an idea known as the Steinmeier Formula.

"If the summit meeting is to be meaningful, it should have a result, and the result should very much be on the Steinmeier Formula," said Gerhard Mangott, professor of international relations at Austria's Innsbruck University.

Ukrainian Foreign Minister Vadym Prystaiko ahead of the meeting reaffirmed his country's key demands of a "total and permanent ceasefire, our control over the borders of a unitary and indivisible state, the disarmament and dismantling of illegal armed groups, local elections in accordance with our legislation."

The Kremlin has sent signals that it is ready to work with Zelensky, whom Putin has described as "likeable" and "sincere".

But the Russian leader also will not want to return empty-handed and will be pushing for an easing of sanctions.

German Foreign Minister Heiko Maas told the Funke newspaper group that "we have to do everything we can... to make progress in the Ukrainian peace process", and described the conflict as "a festering wound in Europe".

Maas praised Zelensky for bringing "new momentum" to the talks, adding that "to make progress with the next difficult steps, Russia needs to make a move too".

"There remains the problem of trust between the parties," said the French presidential source, who asked not to be identified by name. "This needs to be created before we can move forward."

Monday's summit is the first of its kind in three years and seeks to implement accords signed in Minsk in 2015 that call for the withdrawal of heavy weapons, the restoration of Kiev's control over its borders, wider autonomy for Donetsk and Lugansk, and the holding of local elections.

The summit is a hugely delicate event for everyone involved, but particularly for Zelensky, who is under pressure not to cede ground to the Kremlin.

About 200 demonstrators spent the night in tents outside the Ukrainian president's office, seeking to put pressure on Zelensky not to "capitulate" to his Russian counterpart.

The Ukrainian leader, who came to power after starring in a comedy show about a school teacher who suddenly becomes president, took a realistic tone ahead of the talks.

"I want to come back with concrete results, but we understand that we cannot have everything. The meeting is already a victory. Since 2016, there has been no dialogue."

For Macron, the summit is a centrepiece of an increasingly bold foreign policy he is driving despite troubles at home, where transport workers have been on strike for days in a dispute over pension reforms.

Macron, who shocked NATO allies last month by declaring the alliance brain dead, has made clear his belief that Europe needs a strategic partnership with Russia.