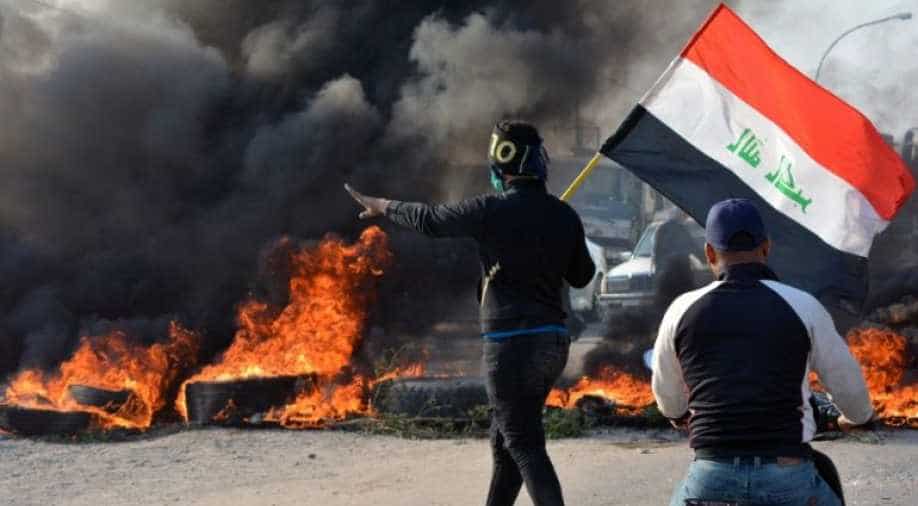 The casualties in clashes with security forces were the latest episode of violence in the nearly two-month-old grassroots movement demanding the total overhaul of Iraq's political class.

A protester was shot dead Tuesday in the Iraqi capital and dozens more were wounded across the country's south, where burning tyres blocked highways and thick black smoke blanketed its restive cities.

The casualties in clashes with security forces were the latest episode of violence in the nearly two-month-old grassroots movement demanding the total overhaul of Iraq's political class.

At least 350 people have been killed and around 15,000 wounded since the protests broke out on October 1 in Baghdad and the Shiite-majority south.

The latest victim fell in Baghdad, shot by a rubber bullet near Al-Ahrar bridge, which leads to a cluster of government buildings on the west bank of the River Tigris.

Fearing protesters would cross it to storm those offices, security forces have sealed off Al-Ahrar and used volleys of tear gas, rubber bullets and live fire to keep crowds back.

Demonstrators — most of them teenagers — throw rocks from behind their own makeshift barricades in daily skirmishes that have transformed the historic heart of Baghdad into a flashpoint.

The clashes left another 18 demonstrators wounded near Al-Ahrar on Tuesday, according to a medical source.

Many of the young men had been there for days or weeks without going home, with one telling AFP: "We won't leave unless it's in coffins."

'No family, no home'

"Either way, I've got no job, no money, so whether I stay here or go home, it's all the same," said another.

An Iraqi tricolour tied around his shoulders, he went on bitterly: "I'll never be able to get married without work or a salary, so I've got no family and no home anyway."

Coloured smoke bombs went off all around them, filling the colonnaded streets with puffs of orange, green and purple.

In the south, it was protesters themselves who were responsible for smoke.

They burned tyres along highways outside Diwaniyah, blockading main bridges and one of the province's three power stations.

Schools and public buildings have been shut there for the past month by strikes and road closures, but skirmishes with riot police have been rare.

Demonstrators and security forces in the Shiite holy city of Karbala lobbed Molotov cocktails at each another.

Nighttime skirmishes have become routine in the city, but on Tuesday they carried on into midday.

In Dhi Qar, arteries linking key cities and the three oil fields of Garraf, Nasiriyah and Subba were shut.

Glimpses of a looming crisis

The three oil fields together produce around 200,000 of Iraq's roughly 3.6 million barrels a day.

Iraq is ranked OPEC's second-biggest crude producer and, according to Transparency International, the world's 12th most corrupt country.

The turmoil since the start of October has not significantly impacted oil production or exports, which fund virtually all of the country's state budget.

Iraq's cabinet is currently discussing the 2020 budget before it is submitted to parliament and government sources say it is expected to be one of the country's largest yet.

That is mostly due to the enormous public sector, which has ballooned in recent years as the government has hired tens of thousands of new graduates in a country with a severely under-developed private sector.

But experts say that model is unsustainable for a country of nearly 40 million people, set to grow by another 10 million in the next decade.

Indeed, public anger over a lack of jobs fueled the latest grassroots protests, which are Iraq's most widespread, and deadliest, in decades.

One in five people lives below the poverty line and youth unemployment hovers at a staggering 25 per cent, according to the World Bank.