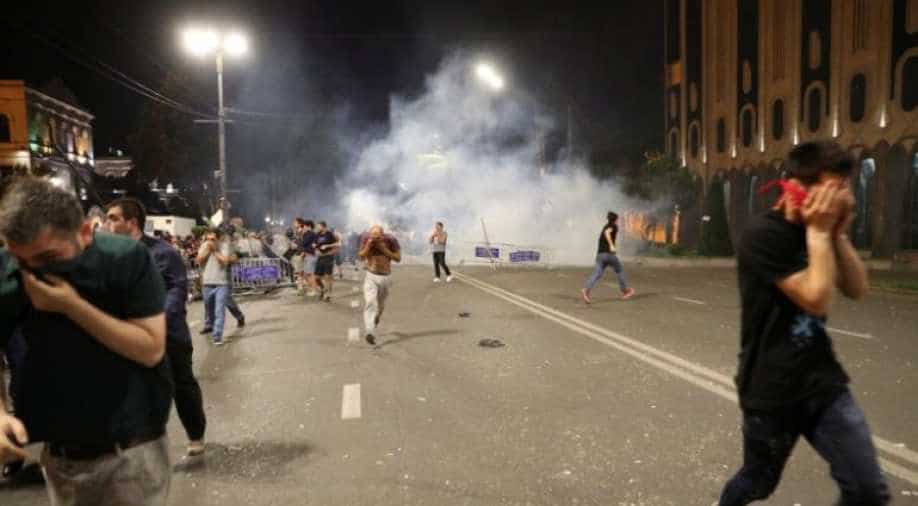 The violence broke out a day after 20,000 people rallied in the centre of the Georgian capital Tbilisi to protest against the government and demand an early parliamentary election.

Hundreds of police officers were then deployed to the scene, who gave protesters 30 minutes to disperse before using water cannon. A Reuters reporter saw two policemen firing tear gas at a crowd at one of the locations, though police later denied using teargas.

Opposition activists said more than 20 protesters, including some opposition leaders, had been arrested.

One group of protesters remained in front of parliament afterwards, some giving speeches on a stage as police looked on.

Members of the ruling Georgia Dream party managed to get into the parliament building and attend a meeting after three of its entrances were opened. Opposition lawmakers did not attend the meeting.

Tbilisi Mayor Kakha Kaladze said the opposition's actions went beyond peaceful demonstrations and that blocking entrances to parliament was illegal.

"The police acted competently and within the law," he said in a statement.

The protest took place days after the ex-Soviet country's parliament failed to pass a planned electoral reform, a move to full proportional representation from the mixed system at present.

Currently, almost half of the lawmakers in parliament are elected not by party lists, but in single-mandate constituencies.

The European Union's delegation in Georgia and the US Embassy released a joint statement on Monday saying they recognised "the deep disappointment of a wide segment of Georgian society" at parliament's failure to pass the constitutional amendments.

"We consider it essential to immediately work to restore trust through a calm and respectful dialogue between the government and all political parties and civil society with a view to finding an acceptable path forward," they said in the statement.