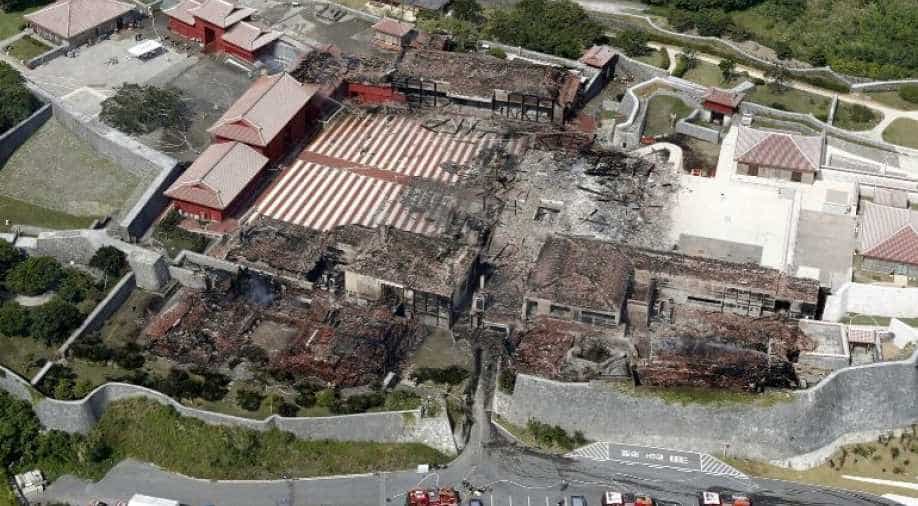 Shuri castle in Japan after being burned down Photograph:( Reuters )

The blaze was believed to have started in the main hall early on Thursday morning, public broadcaster NHK said

Police believe a fire that tore through World Heritage-listed Shuri Castle in Japan's southern-most island of Okinawa this week was not likely to have been caused by arson, Kyodo news agency reported on late Friday, citing sources.

In analysing the evidence, such as surveillance footage at the destroyed castle, local police have found no traces of intrusion into the castle before the fire breaking out, Kyodo reported, citing unnamed investigators.

The blaze was believed to have started in the main hall early on Thursday morning, public broadcaster NHK said. The fire was put out nearly 12 hours later, but by then most of the wooden castle's major buildings had been reduced to charred skeletons.

A spokesman at the main police station at Naha, the capital city of Okinawa prefecture, said investigations are still going on and the police have not excluded any possibilities. "As we are still in the middle of the investigation, we can't say anything further," he said.

Shuri Castle, once a palace and cultural heart of the Ryukyu Kingdom which flourished from the 15th to 19th century, was designated a UNESCO World Heritage site in 2000 and was also a scheduled stop on the 2020 Tokyo Olympic torch relay route.