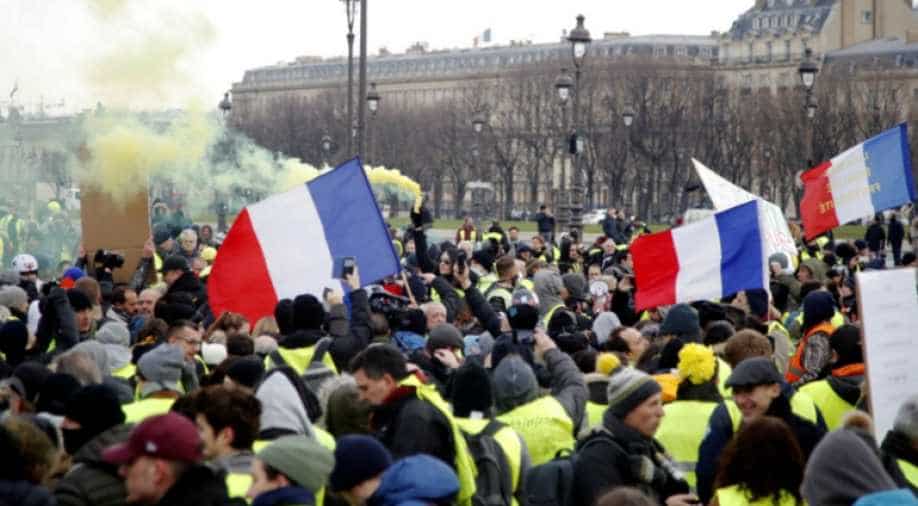 One of the yellow vests' top demands is that ordinary citizens be given a greater say in policy-making.

France's "yellow vests" took to the streets on Saturday for a 10th straight weekend of anti-government protests, defying attempts by President Emmanuel Macron to channel their anger into a series of town hall debates.

A police source said the authorities expected the protests to be "at least as big as last week" when over 80,000 people demonstrated over inequality, the privileges enjoyed by senior public servants and the governing style of a president accused of arrogance.

Last week's turnout confirmed that, after a lull at the end of the year, the protesters behind the biggest crisis in Macron's presidency remain fully mobilised.

In pics: 'State of insurrection' as rioters run amok in Paris

The centrist leader is hoping that the launch this week of a "grand national debate" on policy will mark a turning point.

One of the yellow vests' top demands is that ordinary citizens be given a greater say in policy-making.

Macron this week kickstarted two months of public consultations on issues ranging from taxation to public services, spending over 12 hours in total debating with mayors at two separate gatherings in the north and south-west of the country.

The debates mark a return to form for the 41-year-old president who won election at the head of a grassroots movement that went door-to-door asking the French what kind of changes were needed.

A prodigious debater he appeared this week to relish the return to campaign-style politics.

But many yellow vests have announced plans to boycott the discussions scheduled in dozens of towns and villages, seeing them as an attempt to drain support from a movement that erupted in mid-November over fuel taxes and quickly broadened into a campaign of weekly protests that have regularly ended in clashes with police and destruction of property.

The growing number of demonstrators to suffer serious injuries at the hands of the police has compounded their anger towards the state.

The "Disarm" collective, a local group that campaigns against police violence, has counted 98 cases of serious injuries, including 15 cases of people losing an eye, mostly after being hit by rubber bullets.

On Saturday, protesters plan to march from Invalides war museum in Paris through the left bank of the Seine.

Macron is pinning his hopes on the debate to quash the image of a leader out-of-touch with the concerns of people in rural France.

Polls show mixed feelings among the French, with around 40 per cent saying they would like to take part but around two-thirds saying they do not believe the consultations will end the protests.

"I'm warning you, Mr President. This debate must not become a big bluff," the mayor of the south-central village of Saint-Cirgues, Christian Venries, warned Macron at a public meeting Friday in his region.

To fend off accusations that his policies favour rich urbanites the most, former investment banker Macron has already scrapped a controversial fuel tax hike that would have squeezed car-dependent rural-dwellers.

He has also unveiled a 10-billion-euro ($11.5-billion) package of wage increases and tax relief for low earners and retirees that threw off France's deficit targets.

The measures fell short of the mark for the protesters, who are demanding a radical policy shift in favour of low earners, buoyed by polls that show widespread sympathy for their cause.