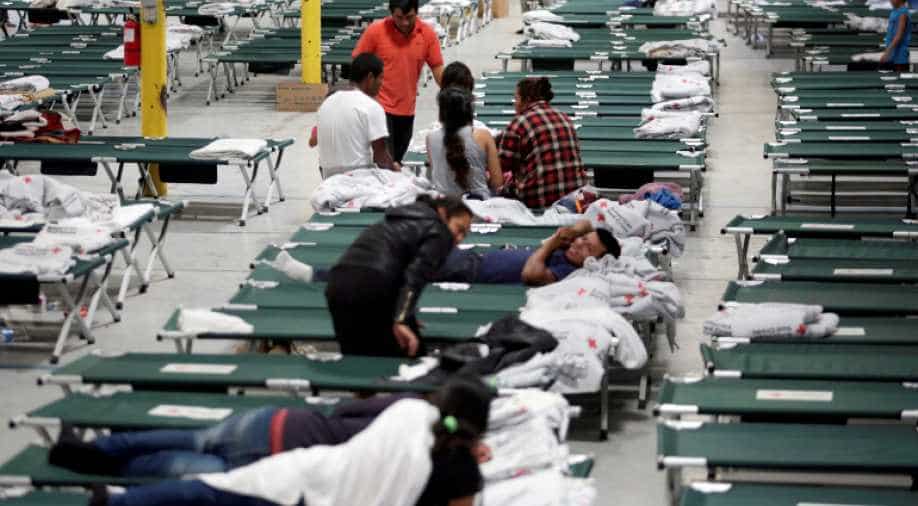 Migrants from Central America rest inside the 'House of the Refugee', which gives temporary shelter to migrants released by ICE and US Customs and Border Protection (CBP) due to overcrowded facilities, in El Paso, Texas, US. Photograph:( Reuters )

Dormitories at state-run Expo New Mexico in Albuquerque could eventually provide temporary accommodation to up to 240 people, making it one of the largest migrant shelters in the state, according to state and city authorities.

New Mexico`s state fairgrounds will begin to house dozens of migrant families to take the pressure off border cities facing a surge in asylum seekers with no help from the federal government, Governor Michelle Lujan Grisham said on Tuesday.

Dormitories at state-run Expo New Mexico in Albuquerque could eventually provide temporary accommodation to up to 240 people, making it one of the largest migrant shelters in the state, according to state and city authorities.

Lujan Grisham has called for a humanitarian response to the rise in asylum seekers, condemning a "charade of fear-mongering" by US President Donald Trump, who has variously warned of a migrant "crisis" and "invasion" at the country`s southern border with Mexico.

"The federal government has not provided shelter or timely adjudication at the border leaving migrants without any means to make arrangements to get to their sponsors or family members in the United States," according to a joint statement by the governor and Albuquerque Mayor Tim Keller, both Democrats.

Migrant shelters in border cities like El Paso, Texas, and Las Cruces, New Mexico, are at or near capacity as record numbers of mainly Central American families cross the border to seek asylum.

The mayors of New Mexico`s three largest cities - Las Cruces, Albuquerque and Santa Fe - have offered resources to help charities and faith-based organizations care for migrants after they are dropped off by US immigration authorities.

"Burqueños (Albuquerque residents) of every faith, ethnicity, and background have come together where the federal government has failed," Keller said in the statement.

Las Cruces has received over 2,400 migrants since the US Border Patrol began to release them directly to shelters on April 12, said Claudia Tristan, a spokeswoman for Lujan Grisham.

Expo New Mexico will absorb the cost of housing migrants and no scheduled activities will be disrupted at the area which hosts the annual state fair, Tristan said.

The centre can immediately house 60 migrants and has the capacity to house up to 240 once minor repairs are undertaken to dormitories, said spokesman Wyndham Kemsley.

Charities will continue to provide food and medical services to migrants, who will spend a night or two at the centre before travelling on to final destinations in the United States, the statement said.

US Customs and Border Protection, which runs US Border Patrol, did not respond to a request for comment.