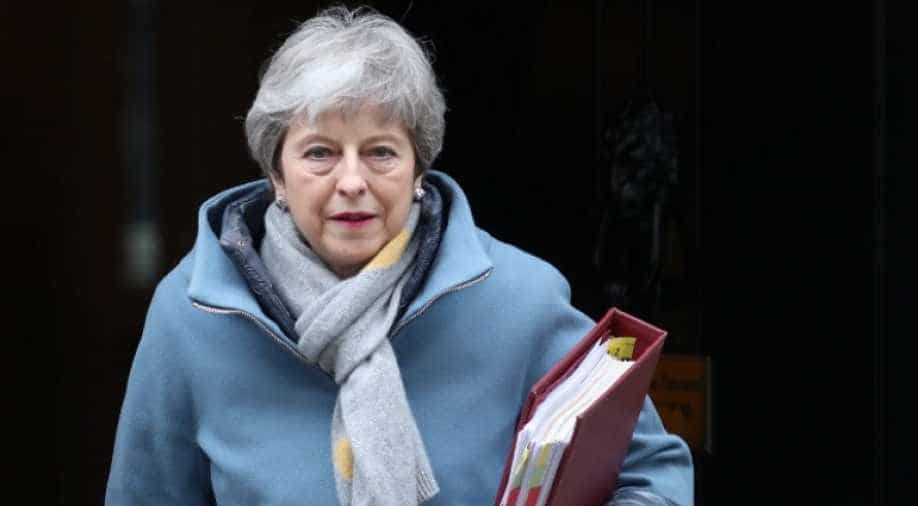 Tightlipped and evasive, she parried questions until EU chiefs asked her to leave Thursday's summit meeting and embarked on a negotiation among themselves to draw up a new Brexit timetable.

Over an agonising two-hour grilling, British Prime Minister Theresa May failed to convince exasperated European leaders she has any plan to deliver an orderly Brexit if MPs vote her withdrawal deal down.

Tightlipped and evasive, she parried questions until EU chiefs asked her to leave Thursday's summit meeting and embarked on a negotiation among themselves to draw up a new Brexit timetable.

EU Commission President Jean-Claude Juncker was "at the end of his tether", one diplomatic source told AFP.

May's government is in crisis and she has proved unable to muster a majority to approve the Brexit withdrawal deal struck at a previous Brussels get-together in November.

With a potentially catastrophic "no deal" departure looming on March 29, the other 27 EU leaders were determined to take charge and came to Brussels armed with the clear plan.

As set out by host EU Council president Donald Tusk and in draft conclusions leaked to the media, they offered to postpone Brexit to May 22 if British MPs backed the prime minister's withdrawal agreement.

But the leaders wanted to know what she would do if the deal fails again -- as most observers believe is likely.

"She replied that she has no plan B, but was sticking to plan A," one source said.

"She didn't have answers to all the questions," Luxembourg's Prime Minister Xavier Bettel told reporters on Friday morning.

Once May had left the room, Macron told the meeting that he had arrived believing there was a 10 per cent chance that May would succeed, according to several European sources.

But, after hearing from her, he said: "I think there is a five per cent chance". To which Tusk retorted, "You are very optimistic."

While May lurked in her delegation's office space, and the leaders argued over dinner, a new conclusions document was drawn up.

After six hours, they eventually agreed to add to their original offer an unconditional proposal to delay Brexit to April 12.

They were forced to postpone a planned discussion on relations with China -- for which May had been due to rejoin them, over dinner -- as different leaders set out different options.

At a press conference afterwards, Tusk insisted there was no rancour. "It was first and foremost a discussion about all possible scenarios. What if, what if -- nobody knows," an EU source said.

May stayed in the building, and was briefed three times by Tusk -- once before the talks, once during a break and again after they finally reached an agreement at 11.20pm.

Some of her team followed developments as they leaked out onto Twitter, with one official admitting afterwards that some of the options considered "would have been quite challenging".

In the end, Britain accepted the offer, even if it fell short of May's proposal for a delay until June 30, and several European leaders expressed satisfaction at the result.

Belgian Prime Minister Charles Michel said the EU "hoped for a rational choice" from Britain, but there remains intense frustration at the deadlock in parliament.

The EU had previously floated the idea of an emergency summit next week if MPs reject May's deal, but Macron warned this would put the responsibility to decide onto the leaders.

"The EU doesn't have all the cards, because everything depends on the British vote," Macron told a late-night press conference.

The discussion over the extension threatened to undermine the unity of the 27, which has held remarkably well since Britain's 2016 referendum.

But diplomats said that leaders are determined that Brexit wranglings will not disrupt preparations for European Parliament elections in May.

"Now Brexit touches really the core of the functioning of the European Union," one said.