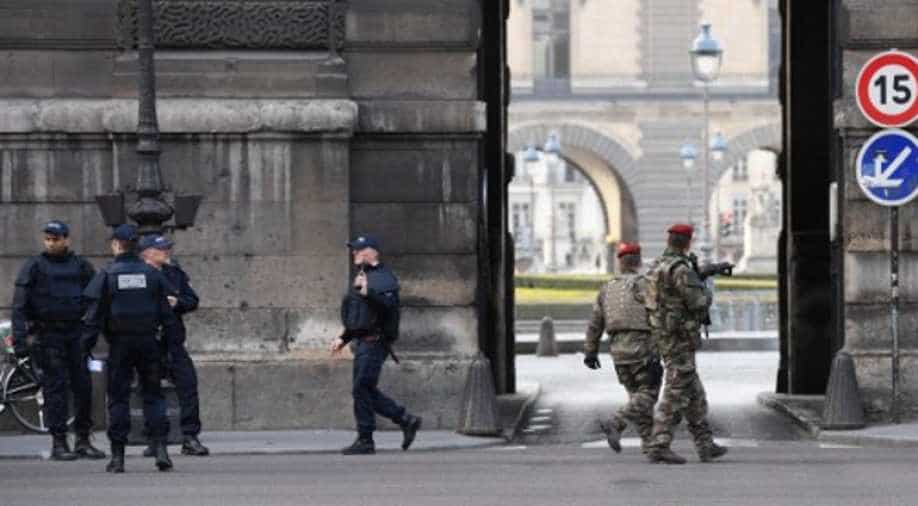 French police officers and soldiers patrol in front of the Louvre museum on February 3, 2017 Photograph:( AFP )

Art lovers returned to the Louvre in Paris on Saturday, 24 hours after a soldier shot a machete-wielding attacker at the museum, believed to be an Egyptian who entered the country a week ago.

The incident on Friday thrust security and the terror threat back into the limelight three months before elections in France, with authorities saying it was a "terrorist" assault.

It also risked dealing another blow to Paris' lucrative tourism industry which has been badly affected by a string of attacks since 2015.

At the Louvre on Saturday, a crowd had formed at the main entrance as the doors re-opened to the first visitors of the day on schedule at 09:30 am (0830 GMT).

"I'm quite worried about coming today, but as we weren't able to visit yesterday we decided to come back anyway," 28-year-old Russian visitor Elena Lordugen told AFP.

Soldiers in uniform with machine guns could be seen patrolling as usual, with routine bag checks also undertaken by Louvre security staff.

Ali Tali, a Turkish tourist in his 40s, shrugged off their presence. "We've used these security measures in Turkey," he said.

They are examining the Twitter account of an Egyptian man named Abdallah El Hamahmy after around a dozen messages were posted in Arabic between 9:27-9:34 am (0827-0834 GMT), just minutes prior to the attack.

"In the name of Allah... for our brothers in Syria and fighters across the world," El Hamahmy wrote, before making reference to the Islamic State jihadist group in another tweet a minute later.

One of the troops was "lightly injured" in the attack after being struck on the head in a public area that leads to one of the museum's entrance.

A second soldier opened fire five times and hit the machete-wielder in the stomach.

His condition stabilised overnight in a Parisian hospital, a source close to the case told AFP.

Based on his phone and visa records, he is thought to be a 29-year-old Egyptian national who is resident in the United Arab Emirates.

Investigators have established he entered France legally on a flight from Dubai on January 26 and had rented an expensive apartment near the Champs Elysee, sources close to the case told AFP.

The government of the United Arab Emirates, which includes Dubai, condemned the "hateful crime" and assured France of its "full solidarity".

President Francois Hollande said that "there is little doubt as to the terrorist nature of this act," an assessment echoed by Prime Minister Bernard Cazeneuve.

France was already reeling from a string of terror attacks over the last two years and the country has been under a state of emergency since November 2015.

The economy, immigration and security are major issues for voters ahead of this year's presidential and parliamentary elections forecast to confirm the country's shift to the right after five years of Socialist rule.

US President Donald Trump tweeted that a "new radical Islamic terrorist has just attacked in Louvre Museum in Paris. Tourists were locked down. France on edge again. GET SMART US."

"We heard gunshots. We didn't know what it was about. Then we evacuated the employees and we left," one man who works in a nearby restaurant told AFP.

The Louvre, a former palace in the heart of the city, has seen annual visitor numbers fall by some two million since 2015 to 7.3 million.

The series of terror attacks in France began in January 2015 when jihadist gunmen rampaged through the offices of the Charlie Hebdo satirical newspaper and a Jewish supermarket in Paris, leaving 17 people dead in three days of bloodshed.