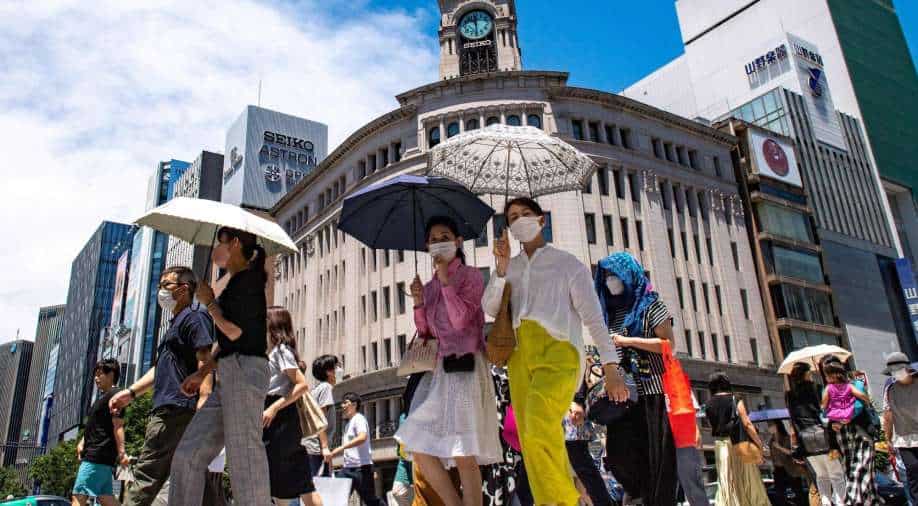 Pedestrians walk on a street in Tokyo's Ginza district amid soaring temperatures on Sunday. Photograph:( AFP )

North of Tokyo, Isezaki recently recorded its warmest June day on record.According to reports, two individuals died from the heat, and hundreds were hospitalised.Families are being urged to use less energy from July 1 through September 30 in Japan.

For the first time ever under a new system, the Japan government issued an "electricity supply shortage warning" on Sunday, stating that the Tokyo area was anticipated to experience a shortage Monday afternoon due to the likelihood that temperatures in the Kanto region would continue high.

The government urged citizens to take steps to conserve electricity, especially on Monday between 3 and 6 p.m.; these steps included turning off superfluous lights and taking precautions against heatstroke.

The Japanese archipelago has experienced record high temperatures for June in some regions following the conclusion of the rainy season in Tokyo at its earliest time since records have been kept.

The Tokyo Electric Power Company serves the area in question, and the Economy and Industry Ministry asked residents to save energy in the afternoon, especially when demand peaks at around 4 or 5 p.m.

Electrical demand was more than anticipated, according to Kaname Ogawa, director of the ministry's electricity supply policy.

Authorities recommended reducing the use of air conditioners, turning off lights when not in use, and taking precautions to prevent heat stroke.

The temperature reached 40.2 degrees on Saturday at Isezaki, which is located north of Tokyo.

On Monday, the mercury in Tokyo's downtown reached about 35C.

The annual summer rainy season has officially ended earlier than ever since records were first kept in 1951 by the Japan Meteorological Agency, according to weather officials.

The rains typically continue into July and reduce the summertime heat.